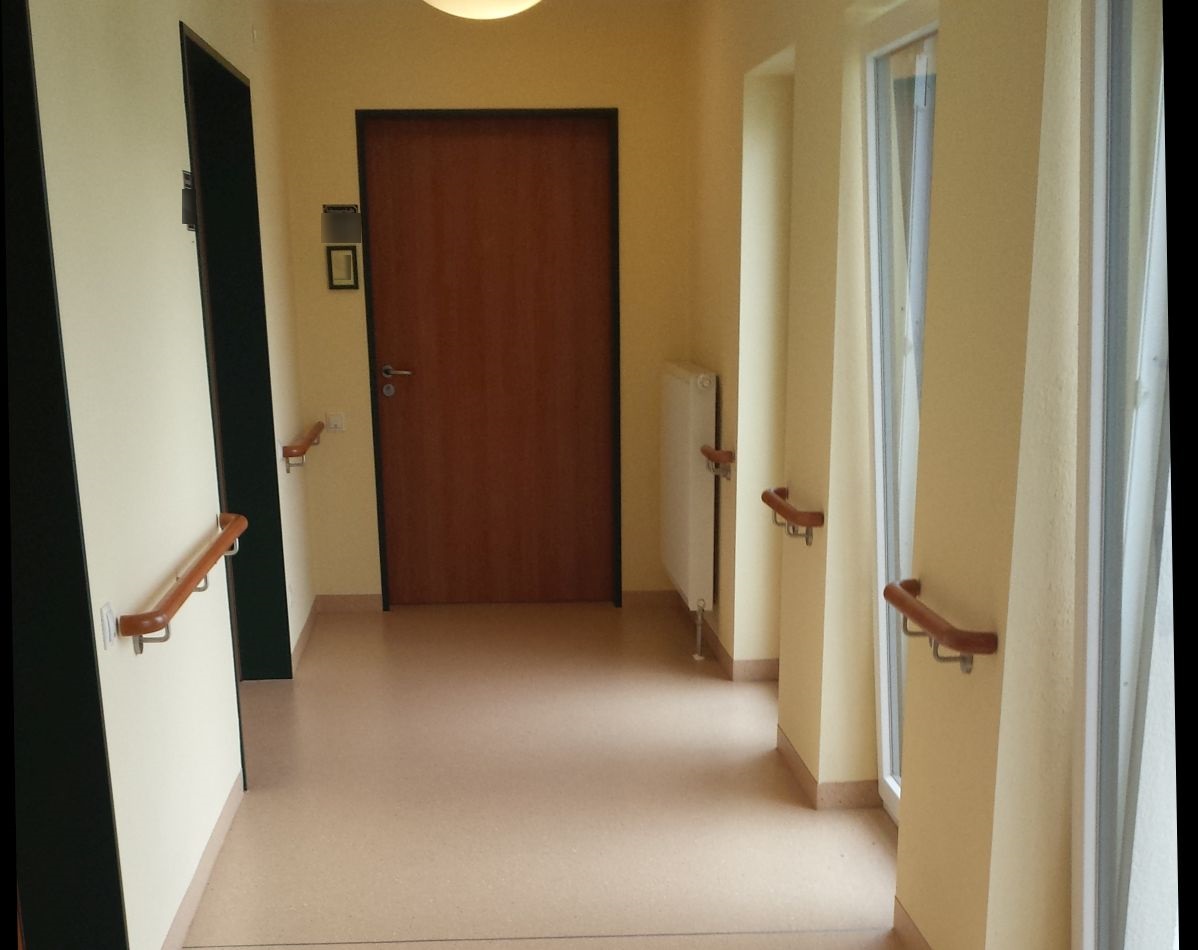 The health condition of Samir, the paraplegic Syrian whose  story  I have told before, has continued to deteriorate in recent months, in particular with regard to his decubitus ulcer.

A volunteer who is working as a nurse went to see him on Friday, Sept. 9, as a result of my last report. On that day, the last change of dressing had taken place already several days before. She was obviously shocked by his condition and described it in a report as follows:

“Part of the numerous bedsores and wounds that Mr. Abdo has on heel, lateral malleolus, middle toe, and calves, shins and coccyx emit a bad odor. The wounds are dressed with some kind of adhesive bandage, which is padded and meant to absorb the wound secretion. Above this, gauze bandages had been diligently applied up to the knee. These were so out of shape that neither good circulation nor an efficient protection by absorption was the case.”

On Monday, Sept. 12, Heidi, Samir’s German teacher, called me. This very dedicated volunteer has been teaching him for some months now and regularly goes for a walk and shopping with him. On the phone she was very upset. She told me that the dressings still had not been changed. Her report on that day was as follows:

“[…] I wanted to go out once again with Mr. Abdo and his wheelchair. It had been agreed upon that the staff were to mobilize Mr. Abdo. I arrived a bit earlier than arranged to bring him new clothes. Part of his garments have disappeared or do not come back from cleaning (which happens every now and then). I told him that the nurses will come right away to put him in the wheelchair. He told me then that he could only get into the wheelchair after his bandages were renewed, stating that the last change of dressings was 7 DAYS ago. I addressed the nurses; they said that the bandages were still to be changed. In the meantime I occupied myself with another resident of the home. When I came back, Mr. Abdo told me that apparently they had washed him, but had not renewed the bandages. I immediately spoke to the director of the retirement home. She told me it would have been Samirs turn to have his dressings changed on Friday. However, he had refused that and had thrown the nurse out of his room … And therefore it was none of her business. […]”

However, we were able to disprove this latter assertion, since on that very Friday, Heidi herself had been in Samir’s room together with the volunteer from the circle of helpers, and they had even tried in vain to find someone who would renew his dressings.

Following this, the home director even threatened the helper with an order to stay away from the retirement home if she did not cease to complain.

The situation depressed me deeply. That day was the Festival of Sacrifice and for the evening, we were expecting guests. Nevertheless I spent several hours trying to find a solution. I called several contacts in the hope of finding a provisional space in a nursing home. Unfortunately my attempts to this effect were in vain. After being given several tips, I spontaneously decided to call the supervisory authority in Erding. I could not think of any other solution.

A very nice lady listened to my detailed complaint and asked me to send her an e-mail with headwords on the situation after the call. I wrote a detailed report, which I sent to her together with the nurse’s report. Then I asked Heidi, the German teacher, to also call the supervisory authority and to also submit a report, which she did immediately.

On Wednesday morning, less than 48 hours after I had filed the complaint, Samir called me and told me that the home superintendent was in his room. I calmed him down and asked him to tell everything calmly and truthfully.

He reiterated what happened during this visit as follows:

“There were three women in my room, accompanied by an Arabic interpreter. They were all very nice. They asked me many questions and I answered all of them. Also present were the director of the home and her representative. They seemed to be very concerned. Again and again they tried to make me look like the culprit, partly with blatant lies. Luckily, I was able to refute their accusations every time. Both were pretty agitated and bore crimson faces. And when I presented the dressing change protocol that I had kept for the last two months, they went all pale. This was something that had not expected at all. I believe they had not imagined at all that I would fight back.”

I had advised him already at a very early stage to keep a log when his poor treatment became evident. Again and again I had asked him to write down all the details of every dressing change: date, time, nurse and whether only the dressing was renewed or if the wound was also taken care of.

After talking with the lady from the home supervision, representatives of the public health department, who were also present, inspected his wounds. An Arabic interpreter, who accompanied the group, saw to it that the communication was possible without any obstacles.

On the evening of the same day, I made my way to Erding to bring him a lamb dish I had put aside for him from the Festival of Sacrifice.

I found him in a good mood. The fact that they had listened to him and took his complaints seriously had given him hope. We talked about the events of the day. He described the reactions of the home director at length and I could even sense some satisfaction in his words.

“I cannot stand the injustice and could never be silent. I actually hadn’t wanted to start an argument with them. But they left me no choice.”

While he was eating, we talked about his progress in German, about other Syrians in accommodations and about his family which had remained in a camp in Turkey and that he would like to have them with him. Eventually he told me something about his brother. I asked him where he was.

He raised his eyebrows and said, “He has been killed in action” and continued eating.

I wondered if after five years of war you get used to the fact that relatives constantly die and said: “How is that? In Syria so many people are dying, does one get used to it? How was that when your brother died?”

“He was killed one and a half years after I was injured. On November 4, 2012, during a fight against the regime. They tried to lift a roadblock. He was hit by two shots in his chest.”

I called my father again. When he answered, I asked him: ‘By Allah, where’s my brother? What happened to him?’

He replied: ‘Pray to Allah to forgive his mistakes and have mercy with him’.”

Samir stopped talking. He turned his head to the side and cried silently. At that moment I knew that despite the war people do not get used to death. I regretted having asked him that question.

“I am sorry. Let’s talk about something else,” I said.

He wiped the tears from his eyes, ignoring my last sentence and said, “That day, I felt for the first time that I was handicapped. My brother has always done everything for me. He was my eyes and ears. Through him, I had noticed everything that was happening outside and especially in Syria. He stood up for me and got me everything I needed. Now he’s dead and I’m lying here with a disability. I wish I had died back then and that he had lived on.”

For a while, he stared into space while I was silently reflecting on what he had said. Then he looked at me and said: “Well then, I’ll continue to eat.”

When he had finished his meal, we talked on various subjects for a while before I finally said goodbye. Before I left, he said: “May Allah protect you and keep evil people away from you.” He jokingly added: “Such people as the home director here.”

I answered his joke saying: “Oh, they don’t scare me. I have been practicing Taekwondo for many years. I can defend myself.”

Incredulously, he looked at me and asked me how long I had been training. He seemed very interested.

“Ten years. But I stopped four years ago. No more time. Why do you ask?”

“I trained one and a half years before I was then recruited for the military service. I loved this sport.” He proudly told me about his favorite technique, ‘Momdolyo Chagi’, a kick with previous rotation. Then he showed me a defensive technique where you use your hand and finally he counted to ten in Korean. We talked a bit more about the sport and when I left, he said: “I’m so happy that we have something in common. I wouldn’t have thought so.”

I knew that it came from his heart, but I also felt his pain. “May Allah let you recover,” I said helplessly. “Maybe we can have a work-out together one day.”

I left his room and felt miserable. Both the story of his brother and talking about a sport he loves, but may never be able to do any more, did not let me rest.

As I sat in my car, I had to think of a similar situation I had experienced a few days earlier:

I had invited a few friends to the Festival of Sacrifice. Among them, there were the Syrian lawyer and his wife, whose arm had been injured badly by a barrel bomb and who would probably never be able to move her arm properly again. When she came into our living room, she saw my wife’s electric piano. She ran the fingers of her good hand over it, tinkled away on the keys in a somewhat clumsy fashion, and then said: “I had always dreamt of learning to play the piano.” Unlike Samir, she let her bitterness shine through, for she had had to bury this dream.

When I went back to Munich on the highway from Erding, I felt a burden on myself. The burden of the fates, the entire scope of which in reality I only begin to fathom. I felt powerless and weak. On the radio, they were playing the song “Human” by Rag’n’Bone Man. For some reason, it gave me some consolation at that moment.

You can read part 5 of his story here