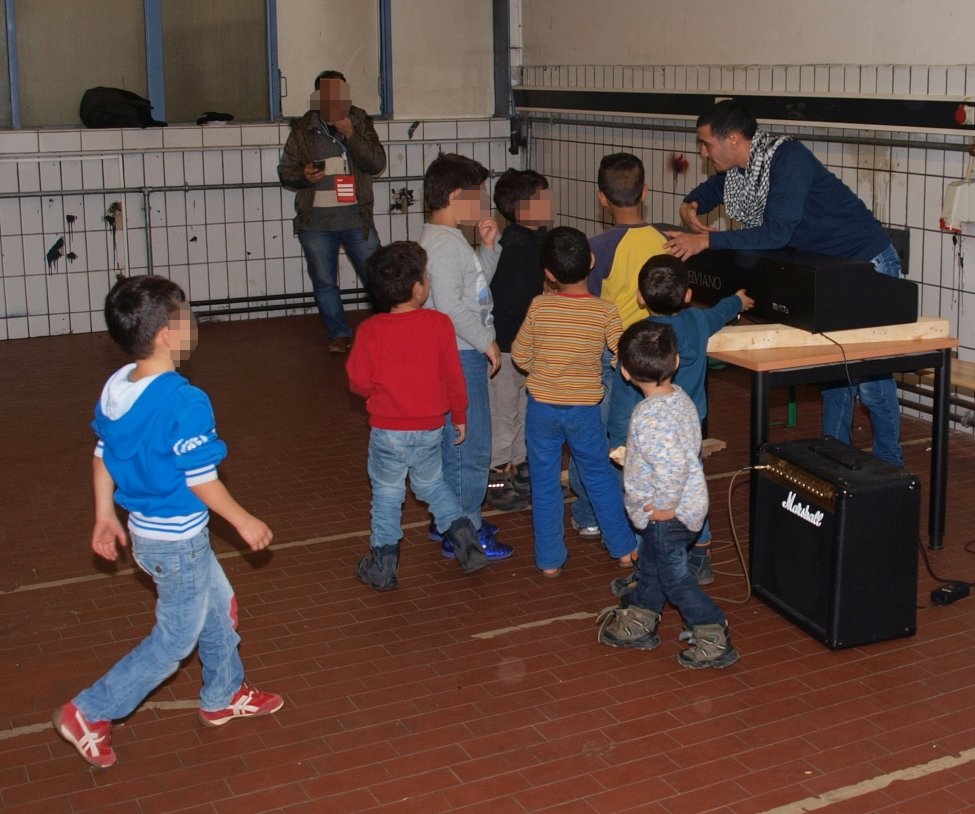 Aeham Ahmad, the pianist from the Yarmouk camp who performed at the Thank You concert for refugee volunteers, was at the TEDx in Munich on Monday. I suggested to him that he organize a small concert afterwards at the shelter at Denisstrasse. He agreed without hesitation. And the helpers at Denisstrasse also thought this was a great idea.

I will describe this day in this article. Therefore, it will be somewhat different from my previous texts.

Shortly before it started I spoke with Aehem on the phone. I told him that David, a helper I am friends with, had loaned me his electric piano and an amp.

“Do you also have a microphone?” he then asked.

“Oh, I forgot that. But you also didn’t have a microphone in the Yarmouk camp,” I answered, although I was aware that a microphone would have been important.

“In the Yarmouk camp, when there was a crowd I sang for 15 children and not in a hall with 150 people.”

“Don’t make such a fuss, in the Yarmouk camp you had to sing over bombs. You are used to singing loud,” I said half-jokingly, half consolingly. Sometimes it’s difficult to admit when a mistake.

“You want to ruin my voice!”

In the last minute I tried to organize a microphone. But to no avail. I am just not an event manager

At 4 pm a couple of volunteers and I started preparing the hall in the emergency shelter for the performance. A couple of refugees helped us and set up picnic benches.

Aeham arrived at 5:10 pm. Two young men met him and greeted him.

“Are you from Yarmouk?” one asked.

“Yes, I played piano there in the destroyed streets”, explained Aeham.

“I remember! We are also from Yarmouk“, said the first one. “Didn’t you also sell falafel there?”

Aeham laughed: “Yes, exactly, I did. I made them out of lentils (normally falafel are made out of chickpeas). A woman once asked me why my falafels were so red. I told her that it was from the spices.” He laughed and everyone laughed with him.

One of the young men asked me: “Are you also from Yarmouk?”

I smiled and said: “No, I am Tunisian. Tunisian-German.”

The men hung around Aeham and spoke with him. They talked about papers. Asked him how long he has been here already. He showed them his registration papers. They said how long they had to wait and that they had even started sit-ins. But the situation was apparently more relaxed in the meantime. I sensed the need to share, but at the same time I felt that this conversation would not end and therefore suggested that he should first play a bit of music. After all, there were also women and children who only came for that reason.

Aeham played several songs. The people listened, clapped and were entertained. But when he sang his song “Call of the People” it suddenly got quiet. It is the song that he also played at the Thank You concert. It is about Syria, the destruction, the suffering and hope.

I looked at the faces of the men and women and could see how they felt the words.

Then he did what he did in the Yarmouk camp in the past years. He sang for the children. They gathered around him and sang with him. They suggested songs and would strike up a song while he accompanied them on the piano. It is wonderful to watch them. It is the most beautiful moment in this evening. At one point Aeham bent over to me, pointed out a small 3-year old boy and whispered:

“This little boy is driving me crazy. He reminds me so much of my son Ahmad. I only see him the whole time.” He briefly hid his face in his hands, and then continued to play as if nothing had happened.

Aeham sang, and again and again a man or a child would join him to sing along. In the meantime, the coordinator for the helpers found a megaphone. It served as a substitute microphone. The tone was horrible. But it was no longer about the music, but the atmosphere. One man sang a song of suffering he composed himself and Aehem improvised on the piano. Then he discovered a boy who knew a few songs and stood him on the table. The boy seemed to enjoy the spotlight and sang several songs while Aeham accompanied him on the piano. The children were amused, the women clapped and the men enjoyed themselves.

At some point the piano fell silent. Many in the audience left and a few – mainly young men – remained and spoke with Aeham.

“I am also a Palestinian from Yarmouk. Where are you from exactly?” asked one.

“Do you know the music store in the Mansoura Street?”

“That was my business,” he said proudly, and then he added sadly: “Now everything is gone. We have nothing left.”

“How did you get out?” asked another young Syrian from Yarmouk.

“I paid, but I was arrested. I was locked in various jails for nine days. I had to buy my way out,” answered Aeham.

One man said: “The regime has kept Niraz Saied, the photographer from Yarmouk, in prison for one and a half months because of his photos. He ended up in Fara‚ Falastin (Palestinian Sector).”

Everyone looks glum when they hear “Fara‚ Falastin”. One said softly: “He is a goner.” The Palestinian Sector is one of the worst sections in the Syrian secret service where people are tortured. The torture often ends in death. I have heard from several refugees that if someone hasn’t been released within a month from there, then they are most certainly already dead.

Niraz Saied was the 2014 winner of an EU-supported photography competition for the UNRWA (United Nations Relief and Works Agency for Palestine Refugees in the Near East).

We talked about the Thank You concert. Many of the people there tonight were there.

One of the boys from Yarmouk said: “Yes, we were there. With tears in our eyes. You sang very beautifully!”

Another one added: “When you said ‘Yarmouk is here’, I cried. That was an indescribable feeling.” He pulled out his smartphone and proudly showed us his videos from the concert.”

They traded phone numbers with Aeham and talked about starting a singing group with him and going to the emergency shelters in Germany to sing for refugees.

When he had to leave, the coordinator for the helpers provided him with a couple of bottles of water for the way. A Syrian said to Aeham: “Do you see the helper over there? That is a man with a huge heart. He has done a lot for us. He is the best!”

I gratefully looked over at the man. He is also Tunisian. A fellow countryman.

Later, on the telephone

On the way back to Kirchheim, Aeham called me again. We talked about the event and a few other things. Then he said sadly: “I have had to think about this little boy the whole time. He looks so much like Ahmad, my son. I want to have my children with me again.” My children are with me, at home, and safe. At this moment I don’t know what I can say to console him.

Ahmad and his younger brother Kinan stayed with their mother in Damascus. The money that Aeham got from his mother for the trip was not enough for them to flee together. That is why he came alone, with the hope that he would be able to bring them over to join him later.

On this day, most of the German newspapers carried the news that De Maizière is planning on suspending the family reunion regulations.