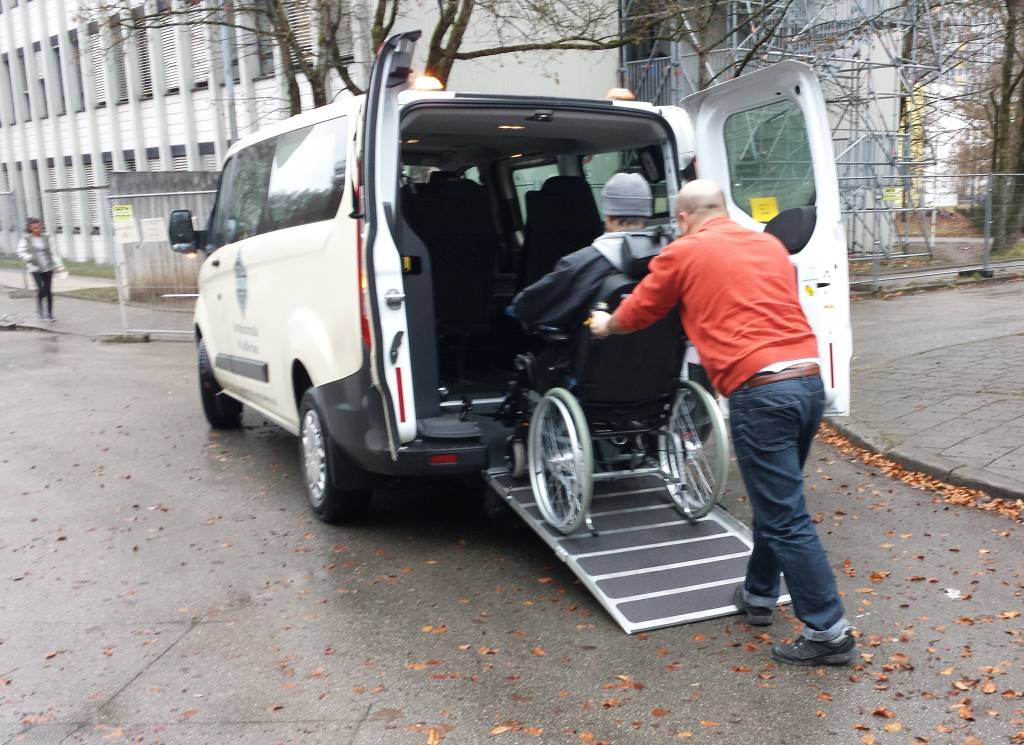 In the last three months I accompanied Samir further on his way to a normal life. Although it again and again recedes into the distant future, we, together with other helpers, are trying to continuously overcome one hurdle after the other.

(The whole story about Samir can be read here)

On Nov. 24, 2016 Samir received his summons to the hearing as part of his procedure for granting the right of asylum. The appointment should take place on Dec.12, 2016. I took the day off to accompany him.

The previously ordered ambulance arrived a little late at the meeting place agreed upon. Once Samir in his wheelchair had been unloaded from the van, I pushed him to the main entrance, where a friendly security staff noted that he should be treated with priority. We went to the reception where I submitted Samir’s documents. Among other things, I handed over a letter by the family doctor, who pointed out that sitting for long periods would worsen the condition of his bedsores.

We sat in the waiting room and talked. I told him about a colleague who would drive to Tunisia for 4 weeks to spend a month of his parental leave there.

“It’s such a distant prospect, just to be able to visit one’s home for a few days. For 6 years, this has been denied to me”, Samir said thoughtfully.

He told me about his wife’s difficult situation, sitting in Turkey in a camp where she could no longer work for 4 months now since the sewing factory, where she had previously worked for a pittance, now also had closed down.

“With the money she receives from the Turkish government, approx. 27 dollars per month and person, she buys the food for herself and the children. It has been a few days now that people may no longer leave the camp because of the attacks of recent weeks, and in the stores within the camp food costs three times as much as outside.”

While we were sitting in the waiting room, a child was continuously pulling the trigger of a futuristic toy gun, which caused the toy gun to flash wildly and make loud ringing noises. Eventually, Samir tinkered with the idea of buying ​​the batteries from the kid.

The waiting time seemed to become longer and longer. At some point, we ran out of topics and we were only sitting side by side watching the waiting room emptying gradually.

After three hours we were finally called on and a somewhat corpulent BAMF employee invited us into his office.

The interview went well. The BAMF staff was very nice and seemed to be familiar with the Arab world. He repeatedly stressed that he had occupied himself with it for many years. The Iraqi interpreter was also very nice, helpful and on top of that, competent. Although I hardly noticed any errors, they integrated me into their conversation and responded open-mindedly to my explanations.

The conversation lasted a full four hours. It was very exhausting. Both the officer and the interpreter appeared fatigued eventually. Samir, however, got lost in the details of his story and thus prolonged the whole conversation again and again. One might almost have thought that he wanted to take revenge for the long wait. But only almost, because if you have been lying in bed for five years, you develop a lot of patience and perseverance.

At about 6 p.m. the conversation was over. The interpreter translated it to Samir once more and gave us a copy of the printed version. I called the driver of the ambulance service and brought Samir to the arranged meeting point.

On the way, Samir gave me € 100 and asked me to send it to his wife via Western Union.

Many refugees send money to their relatives in Turkey. Samir gets a little less than 100 € of pocket money per month. He mainly buys food with it. He puts a part of it aside to send it to his wife and two children. However, since she has no passport, she cannot receive any money, which is why I should send the money to a friend of his wife’s, who would then pass it on to her.

So I went to a Western Union office a few days later, where I sent off € 300. I had received the difference from donors who had pooled the money at short notice.

The next day, Samir called me and told me that Western Union would not hand out the money to his wife’s friend. It was the time when several attacks had taken place in Turkey, and probably her passport had landed on some blacklist, because this woman had already been sent money by several people.

So I went to the Western Union office at Ostbahnhof a third time, where they had me fill in an internal investigation request. Normally it takes two weeks, but since it was New Year, they told me I had to wait even for three weeks.

It was almost four weeks later when Western Union called me and sent me a number with which I could pick up the money. The money was eventually disbursed, including fees.

I sent the money to another friend of Samir’s. It reached his wife on January 31, 2017, one and a half months after I sent it for the first time.

In the meantime, Samir’s health had not necessarily improved. The care situation in the nursing home has not changed much and the complaint to the health authorities was unsuccessful. Especially his bedsores did not heal, which was due, in addition to poor care, to a permanent contamination with excrements.

After consultation with Samir’s family doctor, they undertook surgery to provide him with artificial bowel and bladder outlets shortly after the interview at the BAMF. The surgery went without complications and a few days later, Samir could leave the hospital. After a few weeks, initial improvement of his bedsores was found.

Furthermore, a very nice physiotherapist was found who visited Samir an average four times per week and trained with him. Occasionally he even brings some food. Samir came to strength and better posture thanks to the training and is now able to sit up in bed on his own. He continues training and hopes to eventually also be able to lift himself over to his wheelchair.

We waited a long time for the official notification. Even two and a half months after the interview at the BAMF there was no answer. And even though I kept trying to encourage him, he pondered all the time and was very worried. Eventually, he began to complain more and more frequently about headaches. Then he complained about the catheter, claiming it was clogged. He wanted to be hospitalized several times where the catheter and bladder were reviewed without detecting any bigger problem. Once, he called me in the middle of the night, and asked me to talk to a doctor. She told me that she suspected that his problems were mainly psychological in nature.

A nurse from the nursing home even told me that Samir was drinking a lot of water with the intention of subsequently complaining about incorrect function of the catheter.

The situation distressed both me and other volunteers who did not know how they could help him until on March 2 he sent me a picture via Whatsapp.

Three pea-sized stones were to be seen on a handkerchief. He said that he had just excreted them. I immediately had to think of kidney stones. This would explain both his complaints and his behavior in the last few days. I spoke to the family doctor, who ordered an examination of the stones.

On March 9, 2017, Samir finally received a letter from the Federal Office for Migration and Refugees (BAMF) containing the official notification concerning his procedure for granting the right of asylum, wherein the following decisions were communicated:

2. The application for recognition of asylum is dismissed.

However, even though the second sentence initially caused some confusion, we soon realized that this is a positive decision and that in this case the important thing is the refugee status. I also consulted a lawyer who confirmed to me that it was now possible for him to apply for family reunification. Samir was very pleased with the decision. I was also relieved because I had been afraid they would only grant him subsidiary protection and we would have to take court action, which in turn is a very lengthy procedure.

So I inquired about family reunification and had to realize with dismay that it was going to be a very lengthy process.

For the application, wife and children need passports, but they have never owned any. And why should they? They had lived a humble life with no prospect of ever being able to travel. Once the war broke out, it was no longer readily possible to obtain a passport. In addition to that, his second child had been born in Turkey, and thus there is not even a birth certificate. I read in various forums of the possibility of filing an application for exemption from the passport requirement. When I asked the lawyer for it, she simply said: “Oh Karim, that was possible 4 years ago … now they try everything to make family reunification as difficult as possible.” 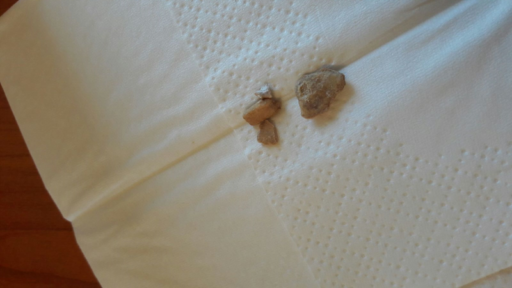 Thus, we collected information of the possibilities that existed for obtaining a passport nevertheless. And here, there seem to be only two: either in a Syrian consulate in Turkey or in an agency of the regime in Syria. A Syrian told me that over a thousand dollars would be required per passport in the Syrian Consulate and it was not certain that it would be issued at all. To have the passport issued in Syria would cost around $ 500. And if we assumed that they managed to somehow scrape the money together, it would also mean that his wife and two children would have to risk their lives to go back to the war zone, and would be prevented to cross the border to Turkey when re-exiting.

Another problem is the required documents for the issuance of new passports. Among other things, the family register is required by the issuing Syrian authority.

However, the family register has been filed with the BAMF.

How we should avail ourselves of it is still a mystery to me at the moment.

One thing, however, is for sure: it will be a bumpy road.