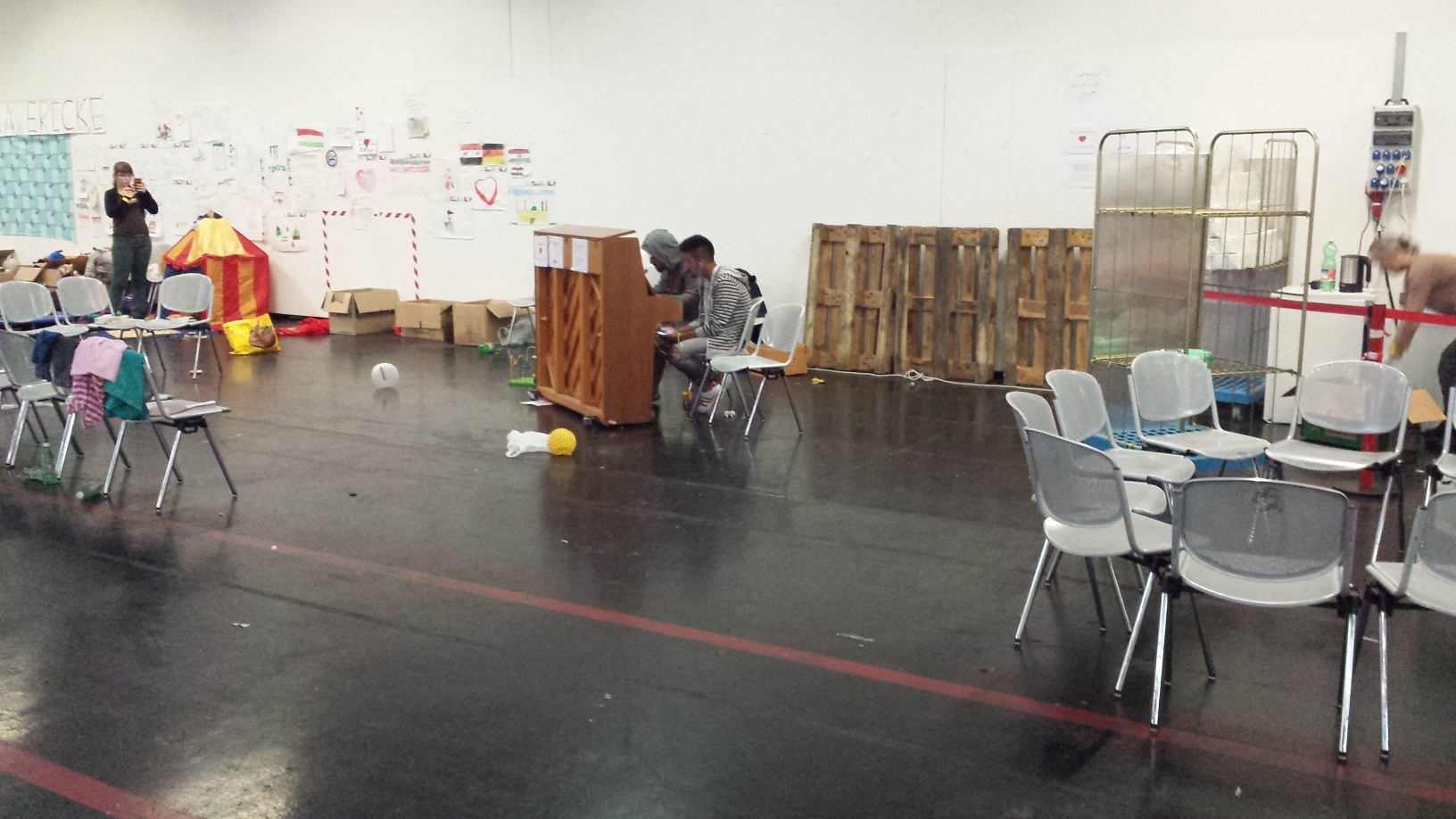 I visited the refugee holding center at the Messestadt (trade fair center) again yesterday from 10:00 p.m. until 7:00 a.m. and managed to have a few conversations there. This time I took a few notes of key points after each conversation, so I’ll reproduce them here individually.

I met a couple again whom I had already met on the first day. Both are in their 30s. They had originally wanted to go to Sweden, but then decided to go to Schleswig-Holstein instead. They wanted to go to a city where there are not many refugees, because they hope their application for asylum will be approved sooner there. Both have marketing degrees and were in management before fleeing Idlib, Syria. They had their diplomas with them. They hope perhaps eventually they’ll be able to work in Hamburg. The two of them are traveling with three small children. The woman did the talking, wearing a headscarf. Her husband was there too and was very obliging. He took care of the children during the interview.

A man of age 50 or so was looking for the prayer room. I showed him the way. He is from Syria, from Rif Dimashq. He told me he had been a refugee for two years, most of that time in Jordan. I asked him why he left Jordan. He replied that they were not allowed to work there and received no aid. He said using drugs there was no problem, but if you found work or prayed, you ended up in jail.

An Iraqi (about 45 years old) told me that he’d like to go to Finland. He asked me to show him the way. But he was very afraid of Denmark. A little later he came back to me and said he wanted to go to the Netherlands to get some rest. He said he’d prefer to go to Düsseldorf or Cologne in the Netherlands. When I told him that those cities are not actually in the Netherlands he was quite surprised. He then asked me if Germany gives asylum to Iraqis at all. He had worked for an American company in Iraq and received death threats.

A man about 30 years old came to me. He was holding his sleeping one-year-old on his arm and wanted to know which city in Germany would be best for him. He is from Aleppo and has been on the road for 30 days. He asked me where I’m from. I told him I’m German-Tunisian. He said,

„Oh, a Tunisian! In my eyes and above my head [this is an expression of respect and welcome in the Near East]. There are a lot of Tunisians, Algerians, and Moroccans where I come from.“

„I’m sorry about that. They don’t represent the Tunisian people. I am ashamed of their actions.“

„Yes, I know. There is good and evil everywhere. Even among them [meaning with IS] there were Tunisians who were good and just. One would have taken them for Umar bin al-Khattab [the Prophet’s second Caliph, known for his justice].“

„No, from Assad. I owned land and even 20 horses worth a million dollars each. It’s all gone. Everything destroyed.“

In the meantime his son was running around us. The man looked at his son and said, „He is why I fled. I would never have left my country. But he is still so young. What’s left for him there but destruction and death?“

He thanked me and excused himself for having taken up so much of my time.

Three young men, two 20-year-olds and one 30-year-old, were being treated by paramedics. I interpreted. The two younger men had each been carrying an ugly wound around for 15 days. One of the men begged them only to clean his wound. He didn’t want to get an injection. But the paramedics said both wounds needed to be operated on to be cleaned. He was afraid and didn’t really want to, but he eventually agreed. He said,

„Will there be pain?“

„You’re already in pain. It will be better afterwards. But at first, yes, it will hurt.“

„You crossed the sea, you’ve been beaten and persecuted… and now you’re afraid to get a shot?“

When the paramedics had finished the treatment, the third friend also wanted to be treated. He showed them a five-millimeter-square bandage on his back. That made everyone laugh. His friend asked the doctor if he’d like to operate on him too. The doctor winked and replied, „Of course! This is Germany. We do things properly here. And everyone goes under the knife.“ The three had not slept for three days.

A man came to the paramedics with his blind wife. Both wanted something for a cold. He said his wife had been blinded by chemical weapons. I asked by whom. He said by Assad. He wanted to get her treated in Germany. She needed a transplant. He wanted to know where the best treatment options in Germany are.

I only spoke with him for about 15 minutes, but he still apologized several times for taking up so much of my time.

A young man (about age 25) is traveling with his sister’s five-year-old daughter. Her parents were killed in the war. He came to Germany to take her to his married brother in Stuttgart. He said, „I’m a young single man. How am I supposed to take care of her? How can I raise her? I can’t leave her by herself. I have to bring her to him. My brother and his wife can take care of her.“ He told me they had crossed the sea on a boat. During the voyage the boat had foundered. Both of them had then had to survive for five hours in the water. When he arrived in Turkey he was locked up, but he was later freed again.

I met a young man. He may have been 30 years old. I noticed him as soon as he arrived because he was somewhere between 1.90 and 2 meters tall and was helping the other refugees. At first I wasn’t sure he wasn’t one of the helpers. Although he had lost weight on the journey, he radiated strength. He is from Daraa, where the uprisings began. This is where children had been murdered by the regime right at the start. He said these children had belonged to his family. That is why he had had to flee. He was traveling with his parents, his sister, and her husband. He approached me, took me aside, looked deep into my eyes, and said,

„I have a question, and by God I beg you, be honest with me.“

„I have no reason to lie to anyone. I am not with any organization or the government. I am here to help.“

„You can tell me the truth. Please. Is it true that Germany will send us back to Syria?“

„No, never. They don’t have the right. There are laws about that.“

„Please, be honest with me, tell me the truth. Someone told me they would send us back.“

He got tears in his eyes and seemed relieved. I told him he had no need to be afraid in Germany. I started to get tears in my own eyes. He told me that he is never afraid, but he was deeply worried that this terrible journey may have been for nothing. He told me that in Hungary they had had to pay smugglers 200 euros per person. They were taken in two cars. Suddenly the car with his family had disappeared. The smuggler he was riding with had tried to extort him. He overpowered the smuggler, took his papers and car keys and locked him in the car. Then he called the police, who helped him find his family again. He is a professional handball player who lived in the U.A.E. He would like to play or coach handball in Germany.

While we were still talking, he found a friend at the camp whom he had lost track of in Austria.

A Syrian couple had initially fled to Egypt. After al-Sisi’s coup they were persecuted and fled to Libya, where they boarded a boat run by smugglers. There were 400 people aboard. On the open sea the smugglers found that the boat had sprung a leak and they abandoned ship. It was eight days before they were rescued by a German oil tanker. The tanker was en route to Egypt, but when the refugees explained that they were being persecuted in Egypt, the crew took them to Crete. The wife wore a headscarf and told me everything while she was being treated by a male paramedic. Her husband sat next to her. He had two broken teeth and needed to see a dentist.

A young woman brings her sister to the medics. She is a nurse herself. She speaks good English and thinks her sister has heatstroke. In Hungary they ran 70 kilometers in the sun. She is from Daraa and is traveling with her sister and her parents. They had not wanted to flee, but she was afraid for her family. She describes how the Syrian people are tearing each other apart. There are good and bad people in both armies. I asked her about IS. She replied that IS was not yet an issue in her region. After all, it was a latecomer to the conflict. She said they had been treated like animals in Hungary, adding,

„If I had known how stressful the trip would become, I wouldn’t have fled.“

„But what would you have done there? You might have died.“

„I am a nurse. I saw so many things there that death became part of my everyday life. I am not afraid of death.“

Later I saw her again bringing another refugee to the paramedics. She stayed there to take care of him. By now it was 5:00 a.m. She still had not slept.

It is 6:00 a.m. Two young men are sitting at the piano playing music. I sit down with them and listen.

„Where are you from?“

„I’m really an oud player. Piano is just a hobby.“

On October 20, 2015 I went to have a look at the shelter on Dennisstraße, since I was not yet familiar with it. I happened to run into a young woman I had met nearly a month and a half earlier at the Messestadt shelter. She told me that she and her family had been taken to Stuttgart to a shelter where they had spent 13 days before being brought back to Munich. The still hadn’t been registered. She seemed very despondent as she told about it. And it hurts to know that she and her family are being shuffled back and forth for no reason. What is the point, I wonder?