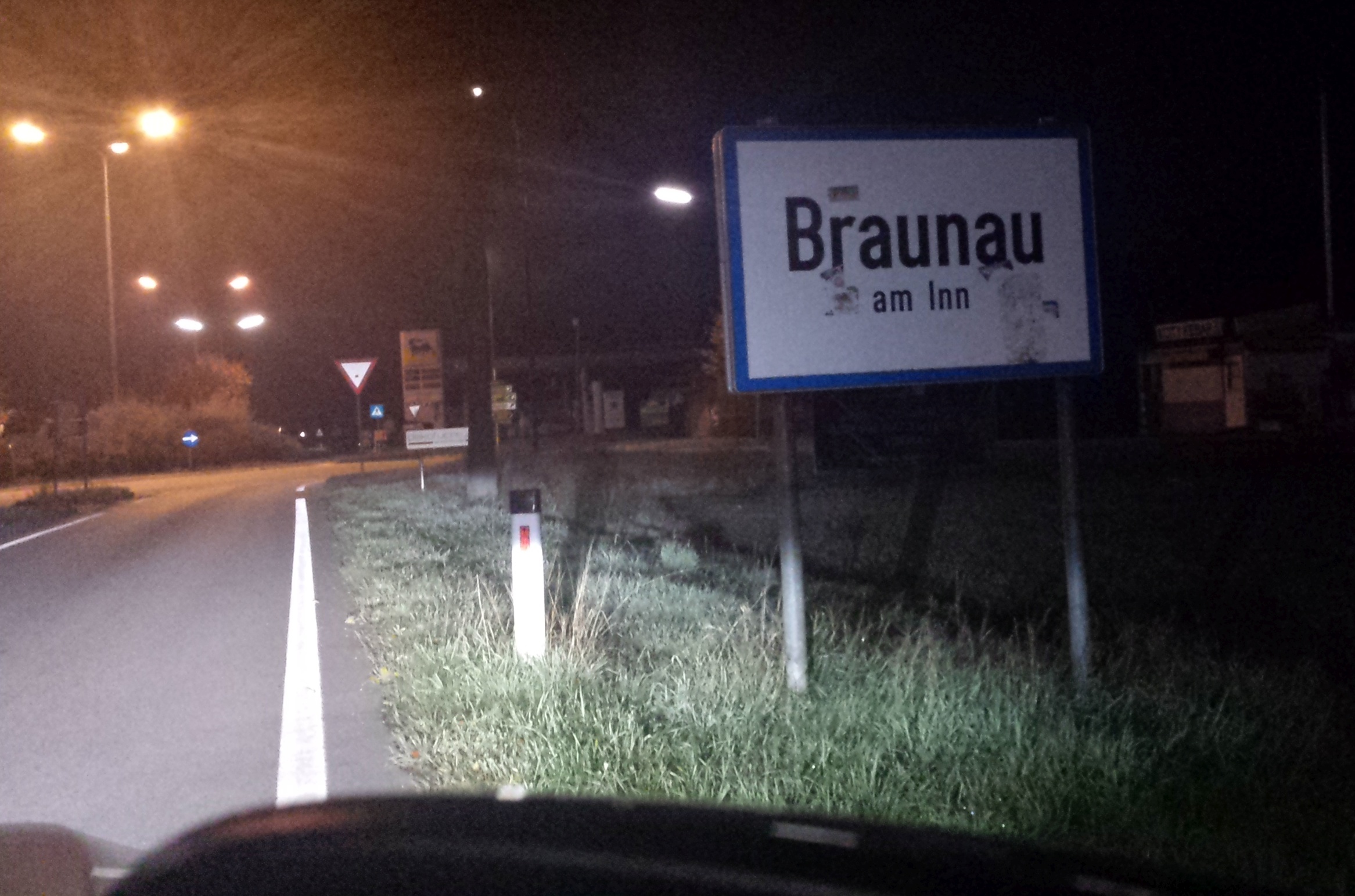 Actually, I wanted to spend a quiet Saturday night and go to bed somewhat earlier. However, around 11 p.m. notice was given that 900 refugees were expected at Dornach. So I made up my mind to go to Dornach. Shortly afterwards, it was suggested to me by another volunteer to drive to Braunau on the German-Austrian border. The reason for this was that about 2,000 refugees had arrived there, all wanting to go to Germany, and the volunteers there were under great pressure. After some hesitation, I drove to the border with the volunteer because there was most likely no interpreter of Arabic there. When we arrived at about two o’clock, the situation, however, had relaxed. I have wondered for quite some time whether I should write an article for that day at all because nobody had told me anything. I finally decided to write a few lines about the situation on site.

Everything happened at the border crossing Braunau – Simbach. When we arrived, the bridge was closed to traffic. During the day – so I was told – cars were still crossing the bridge.

Pretty much in the middle of the bridge there was a police barrier. In front of the barrier about 200 refugees were sitting, standing and lying, waiting to be allowed to pass the barrier. The refugees were mostly wrapped in white paper blankets or in golden emergency blankets. When I looked through the rows, I noticed several small children. They were lying on the floor, wrapped in blankets, sleeping. The night was cold. It was three degrees [centigrade]. On the bridge, the temperatures were even lower.

In the middle of the bridge stands a boy. He looks confused at the crowd queuing up. A man – I suppose he is his father – steps over the barrier that separates the people waiting from the street and goes with him to the opposite parapet. The man helps the child to open his three pants he is wearing one above the other. He asks him to urinate into the river over the parapet.

A man calls me and asks if I speak Arabic. I affirm. Thereupon he says: „My brother here is ill. He needs to be treated. We urgently need a doctor.“ He points at an apathetic man beside him, who is wrapped in a gold-colored blanket.

„He has a kidney disease and needs dialysis.“

„When did he have his last dialysis?“

„Two days ago in Croatia.“

A helper wants to check whether this story is true and asks where he had dialysis. The sick man comes to us and wordlessly pushes up his sleeve. Two large patches appear. As he comes closer to me, I notice his yellowish eyes. He is trembling all over. I wonder if the trembling comes from the cold or from the lack of medical treatment.

„How often do you normally go to dialysis?“

„Three times a week. It’s getting high time,“ replies his brother in his place.

At that moment, a paramedic from the Austrian Red Cross walks past us. I speak to him on the situation. He says to me: „Yes, I know about it. I have been in hospital with him just now. The doctor who examined him sent him back and said that he should get treated in Germany. If I take him back to the hospital now, then he will send him away anyway.“

I go to the police at the barrier and explain the situation to the German policemen. One of them says to me: „If it’s so urgent, then he should go to hospital in Austria.“ I try to explain what I was told by the paramedic, but am confronted with nothing but indifference.

I write on a piece of paper what disease the man has and when he made the last dialysis. Then I say to the man: „Give this paper to a paramedic as soon as you have arrived in Germany. If no paramedic is there, then ask a helper to call 112.“

A man tells me that he had been in the queue for five hours and was traveling with his family. Eventually he had fallen asleep. While he slept, a lot of people were let in on the German side. People just stepped over him. His family had moved on, in the belief that he was in front of them. Now they are separated. He hopes that he will find them again before they are taken further away in a bus.

While we are waiting, a fight breaks out. Two young men want to step across the barrier in the middle of the row. A Syrian woman is scolding, urging them to line up behind. She is taking the two men for Afghans. The two are still trying to get over the barrier. A Syrian man tries to stop them. The whole thing takes place ten meters from the German border. The German police are watching. At this late hour, there are neither security persons, nor helpers, nor policemen on the Austrian side of the bridge. The situation further culminates. I go in between and ask the two young men to step back and the Syrian man, to calm down. I tell them: „If you do not calm down now, then they will not let anybody pass any more. So please calm down immediately. The whole thing can be clarified.“ The threat immediately makes an impact. The two men – in fact, Iranians and not Afghans – tell me that they had just gone back into the city to go to the bathroom. Now they had wanted to go back to their sister who had been waiting in the queue.

The Syrian man says: „That’s not true! They were at the camp and slept while we were standing here in the cold all the time.“

I ask the two young Iranians to stay on my side of the barrier until the police allow the next persons to pass the barrier. One of the Iranians says to me: „We do not want to go on a rampage, we are travelling with our sister and just had to use the toilet.“

The police tell me that in the next few minutes they are going to allow all the remaining waiting people across the border. They therefore request that I ask the people to keep quiet. The refugees tell each other not to push and to advance in an orderly fashion. A man wakes up his three children. I guess they are between 5 and 9 years old. The children have dirty faces. The youngest one is crying because he wants to go back to sleep and throws himself on the floor again.

Then, the German police open the barrier and the people go ahead in an orderly manner. Suddenly I see a policeman rejecting a man harshly and then very roughly pushing him backwards. I realize that it is the man with the kidney disease. They take him out of line and tell him that he will not get through. I go in between and tell the policeman that the man is seriously ill. He replies: „He has pushed a child. Therefore, I don’t care if he’s ill. I have no sympathy for something like this.“ The man is confused. I try to talk to him. However, it turns out that he cannot talk. He makes the impression as if – in addition to his kidney disease – he is mentally retarded. The man stammers incomprehensible words and constantly points to the other side of the border. I see his family who beckons him to come to them. I understand that he fears being left behind. I tell him: „Calm down. I’ll wait here with you and bring you to them.“ When almost everyone has passed the barrier, the police bar the border again. 16 men and the sick man stay behind. I go up to the policemen and try to talk to them. One of the officers says: „Let him pass, he is ill.“ Another policeman draws himself up in front of the sick man with legs apart and arms crossed and says with a threatening voice: „Stop! You stay where you are!“

I say: „Listen. I know it’s crap that he has pushed a child, but the man is seriously ill and probably doesn’t have himself under control. Also, I have the impression that he is retarded.“

The policeman stares at the man for a while, then steps aside and lets him go to his family.

Hello Karim! I happened to read your blog post of Day 13: the situation at the border Braunau/Simbach. I also happened to be there on site during that night and took a few video recordings, where, among other things, exactly this situation can be seen that you describe in your blog, where the man is pulled out of the line by the police! (…) Thank you for your commitment and your detailed descriptions! Regards

I am fascinated by the coincidence and am happy about the unexpected confirmation of my stories. Especially since that happened some time around three o’clock in the morning. One cannot recognize anybody on the video, so I decide to publish it. Thanks to the witness of the encounter.