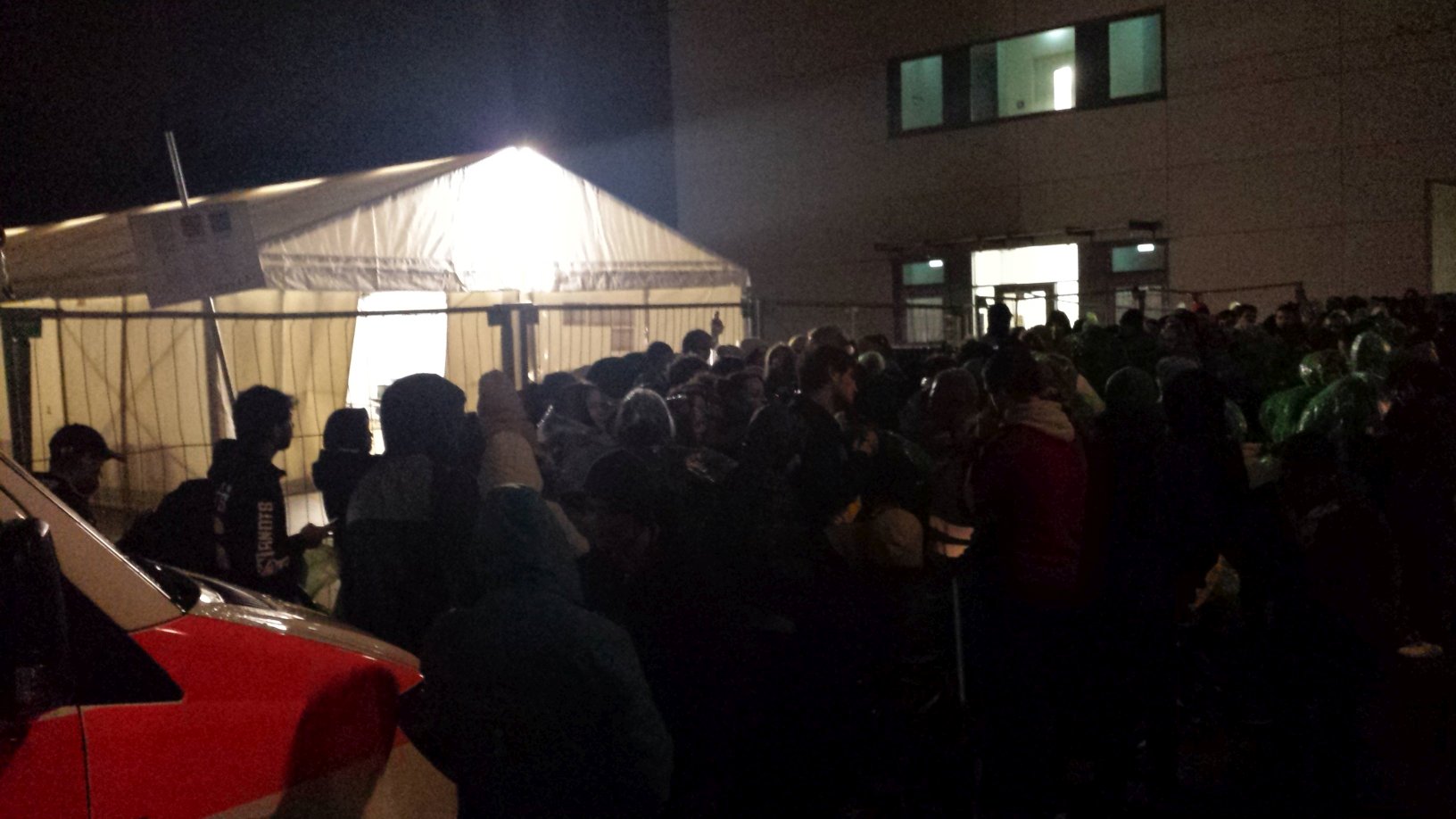 When I helped out at the LaGeSo on Wednesday morning, I was told by a number of refugees that some of them had been waiting for several few nights outside the premises. The thought of this seemed so surreal to me that I wanted to see this for myself and drove back to the LaGeSo again on Thursday night at 1 a.m.  (You can find the first article on the LaGeSo here)

I expected at most to find a few dozen young men there. I pictured them wrapped in blankets on camping mats, awaiting the morning. And because of the heavy rain, I was quite sure that nobody would be on site that night. But when I arrived, a very different scene presented itself.

The entrance of the LaGeSo was closed by a mobile building site fence. In front of it were a few security employees. To the right and left of the entrance, refugees were queuing in two rows. On the right, men, and to the left, women. The rows were bordered by further barriers. Behind these barriers, people were standing pressed together in the most confined space. Some of those waiting had put on disposable rain ponchos, which I at first mistook for garbage bags. A police emergency vehicle was standing on the street in front of the premises, and an ambulance car on the sidewalk. A few yards away, two buses for warming up were parked. One for men, the other one for women and children. In front of the latter, there were five prams. Everywhere, refugees were sitting or lying on the sidewalk.

To begin with, I spoke with a small group of volunteers who were distributing tea to the refugees. They had three five-liter thermos flasks with them. They ran out of tea quickly. Before the volunteers went home to top up the hot water, one of them said to me: „We are organized in the Facebook group Tea in front of the LaGeSo. Today, it is a bit quiet. The last few days, so much more was going on here.“

The worst part of the situation on site was that behind the fence, right at the entrance, two large, heated, illuminated and tents had been set up that were completely empty. A volunteer told me: „They let the people wait outside until four o’clock. Then they let them in.“

„Why specifically until four o’clock?“ I ask curious.

He shrugs: „Who knows.“ And watches the crowd behind the fence becoming agitated. „The worst part is that they lie and tell the press that they let people into the tents all night long.“

„The Senate,“ he replies.

„And the press? Aren’t they interested in the situation here?“

„Yes, several of them have been here already, but nothing has changed,“ he says wearily.

„Do the people waiting here have a good chance that it’s their turn the next day?“ I ask further.

The helper smiles tiredly, looking at me as if I were a naive child and says: „Most of them spend several nights here. That’s the norm. A week is not uncommon.“

I walk towards the waiting men and look into their faces. A young man returns my gaze. I go up to him: „Sorry, I’m here for the first time. And I’m quite shocked by the situation. May I ask you a few questions?“

„Yes, of course,“ he says. His name is Akram (name changed).

„Is this your first night here on site or have you been here more often?“ I ask.

He opens his jacket and takes a red document from his pocket. „Look, this is the fifth night I spend here. I had an appointment on Nov. 5, and I didn’t make it in. The appointment was therefore postponed again and again.“

„What kind of appointment is that?“ I ask.

„I have my residence permit and live in an asylum home. I have to extend the application over and over again so they will assume the costs for the asylum home. That’s what I have to come here for. At the asylum they have now given me a deadline. I have time until Nov. 23 to present confirmation that costs will be covered.“

„Yes, and what if you don’t succeed?“

Akram is in the queue with two friends, squeezed together like everybody else. I ask him where he comes from.

„I am a Palestinian from Syria.“

„Are you by any chance coming from the Yarmouk camp?“ I ask him.

Surprised, he says: „Yes, exactly. You know Yarmouk?“ We talk a bit about the pianist Aeham Ahmad from Yarmouk, and then he asks me: „Where are you from?“

„I am German-Tunisian,“ I reply.

„We Palestinians love Tunisia. Tunisia, the green!“ he says with a friendly smile.

I answer him: „Believe me: we Tunisians also hold Palestine dear to our hearts.“

At that moment, it is getting somewhat noisier. A woman shouts something and men whistle. The door of the police car bangs open and several policemen get out and line up demonstratively in front of the people waiting.

„Brother, could you get us something to drink?“ the young man from Yarmouk asks me.

I go and ask a volunteer if there is water for the people somewhere. He shakes his head and says, „No, we haven’t got any.“

Eventually, I give Akram and his two companions two beverage packets I carried with me by chance. They drink hastily and thank me. I feel bad not being able to do more. We exchange contact information, and before I go, he says to me: „Why do they humiliate us in this way?“

That’s exactly what I am wondering about.

At seven o’clock in the morning, I receive the following message from Akram:

„We got in in the morning and got in the queue. Then the security people sent us away again. They said that we had not stood in line outside and had cheated.“

I ask him how that can be and why they do that.

„Someone has probably bribed a security person to smuggle them in. When that was discovered, they simply sent the first one hundred people home. They apply group punishment to us. I’m going back to the asylum home and will try my luck again at seven o’clock tonight. And after all, the day was not altogether wasted.“

„Why do you think that it wasn’t wasted? Have you been able to achieve something nevertheless?“ I ask.

His kindness at this moment moves me. After such an ordeal, I would have cursed everyone and everything. But it does not surprise me, as ´till now I have always experienced Syrians as extremely friendly people.

In the evening at 9 p.m., I send him a message asking „and where are you now?“

„What do you mean… hiding?“

„I’m on the premises and am hiding in the waste paper garbage container.“

Later he writes to me that they kicked him out again and all has been in vain.

He wants to try his luck again on Sunday evening.

On Nov. 27, 2015, I wrote to Akram again and asked how far he has come. Here the conversation that we have had.

„Peace be with you brother, what’s the news with you?“ I asked him.

„Thank God, everything is fine,“ he replied.

„How far have you come?“

„Yesterday, I finally made it, thank God.“ I read relief between the lines.

„Ah, thank God; how many times have you gone back there to get your turn since the last time we saw each other?“

„God knows, four times, until a security employee finally allowed me in.“

„Does that mean you paid a bribe?“ It would not have surprised me, as they were practically driving people into malpractice.

„So, why has he admitted you then?“ I asked in surprise.

„I showed him an old appointment slip and told him that I’d been waiting there for two months every night.“

„Hahahaha,“ I wrote and actually had to grin over his cunning.

„I even came in in front of the families. Are you still in Berlin?“

„And then we’ll sit down together and I’ll buy you a juice like the one you treated me to. Something good shall be repaid with something good.“

„Oh, forget about the juice. I was embarrassed to have so little with me,“ I wrote. At that moment I remembered a question I had asked myself often since the night at the LaGeSo.

„Listen, if you are standing there at the LaGeSo all night… How do you go to the toilet?“

„You ask a policeman. The toilets are indoors, next to the empty tents.“

„Is your place in the line lost then?“

„No, it isn’t, since you told a policeman. Only problem is that some people then hide inside on the premises, and when the barriers are opened, they speed off. And then chaos ensues.“

„What are you doing now?“

„Now I’m learning German, I was finally able to enroll in a school.“

„I wish you success.“