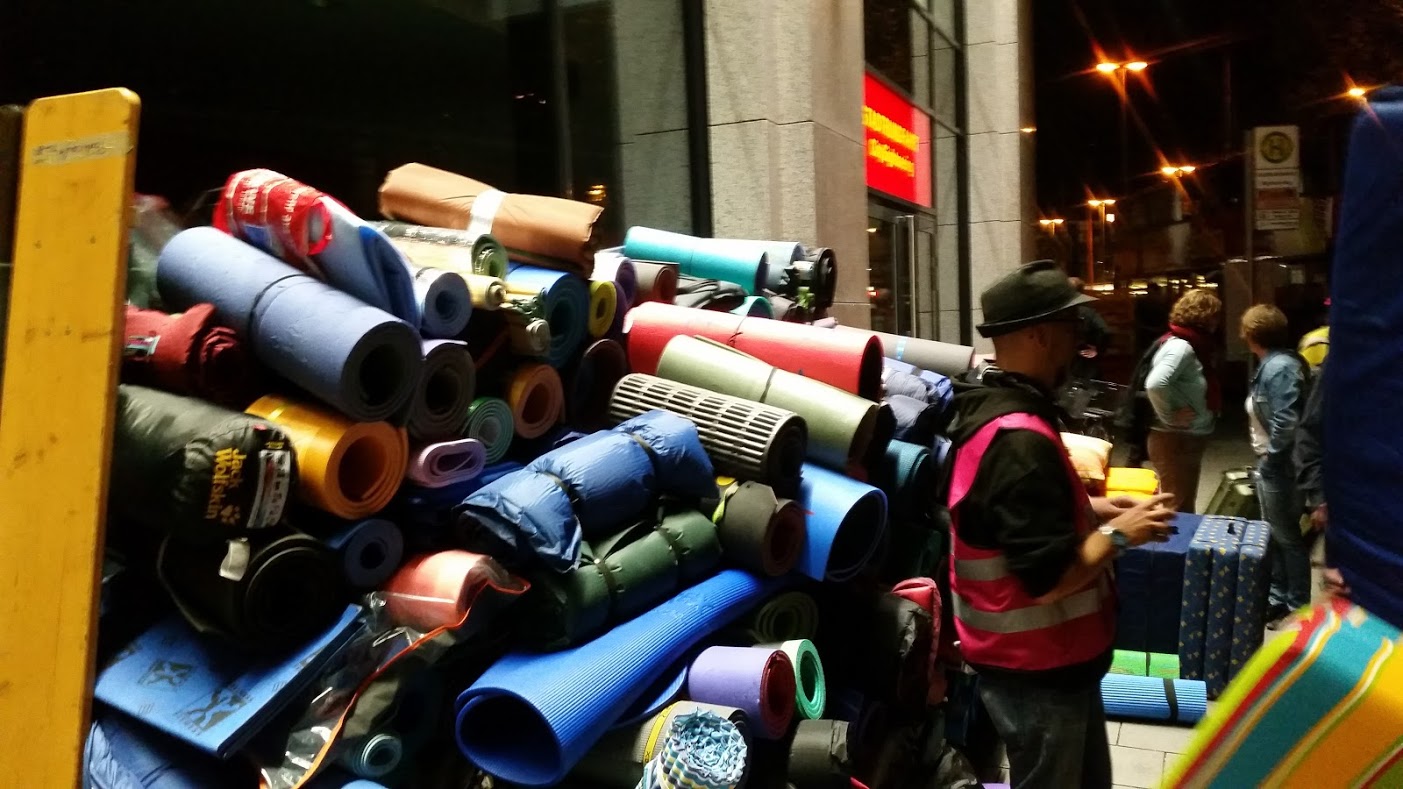 I actually wanted to go to the exhibition center (Messestadt) yesterday. However, there was a call for blankets, sleeping bags and insulated mats at the main station, so I decided to take over 2 sleeping bags that I’ve never really used. The situation at the main station was dramatic, so I decided to stay. A train was supposed to show up at some point and take refugees to a city in the north, but no one knew exactly when this would happen. The refugees had been herded into a hall. I was deeply shocked. Approximately 1,000 people were lying around, sitting and standing on the floor, some on picnic benches. The air was stuffy and the smell was atrocious Outside there were 6 portable toilets, one was broken, and there was nowhere to wash your hands. Anyone who wanted to go to the toilet or smoke a cigarette had to be accompanied by a helper. Unfortunately I didn’t have time to speak in depth with individuals, so I can only report on a few brief encounters:

A Syrian family came up to me and the man explained:
“We bought bus tickets today to go to Hannover tomorrow, where my brother is. Now we have been brought here. This means we will miss our bus.”
“You will be taken to a city in the north. I’m sorry but you won’t be able to use your bus tickets.”
“You mean the money was wasted?”
“Yes, I am afraid so. I’m sorry.”
“But where are they taking us?”
“Up north. They don’t have any more capacity in Munich.”
“But we don’t want to stay in Munich; we want to get to my brother in Hanover”
“I’m sorry, but here you have no choice.”

A Syrian family came up to me and the man said:
“We were in a bus on our way to Saarbrucken. We paid for the tickets. We paid €29 per person, even for the little kids. While we were on the road the driver called the police, they took us off the bus, confiscated our passports and brought us here. Why are we here?”
“They will take you to a city up north.”
“But Saarbrucken is not up north.”
“Yes, that’s true, but you have no choice now. I’m so sorry.”
“And the money? We paid over €200.”
“That is probably gone. What type of bus was it?”
“I don’t know.”
“What color was it?”
“It was a green bus”
“Was it a FlixBus?”
“Yes, that was the name.”

An old Syrian man (about 70 years old) came up to me and said:
“Please, my son, I have a question.”
“Yes, please?”
“Listen. There are huge masses of people here from Syria, Iraq, Bangladesh, Lebanon, Pakistan and God knows where. Why are they all being brought here? In Syria, in our country, there is war and destruction; shouldn’t we have priority?”
“Every person has the right to request asylum. This does not mean, however, that they will be granted asylum. Once you have registered and submitted your asylum application, this will be checked. And depending on the country of origin and personal situation, the decision will be made whether you can stay or not.”
“I understand. There are so many people…”
He looked around anxiously and then said: „Thank you, my son. God bless you.“

In the meantime, the refugees had been brought to the train. While they were waiting, a young man called out to me and asked where they were taking him. As we speak, I recognize his Tunisian accent. I asked him:
“Are you Tunisian?”
“Yes.”
“What are you doing here? Surely you don’t need asylum.”
“I have been in Germany for quite some time; I was picked up by the police and brought here. So I thought, I’ll go along, let’s see where the journey takes me.”
He seemed to be amused by the situation. I am Tunisian myself and at this moment I was annoyed by the blatant abuse of the situation. I wondered if I should talk to the police. But I decided against it. I am a volunteer helper and I want to relay the facts without taking sides. Furthermore, by this time I had spoken with hundreds of people and he was the first one I met from Maghreb (the region of Tunisia, Algeria and Morocco).

I accompanied a man who was about 40 to the toilet. He is the first person who does not seem stressed. I ask him:
“Are you Syrian?”
“Yes.”
“Are you here with your family?”
“Yes, with my wife and 2 children.”
“Where do you want to go?”
“I wanted to come to Germany. It does not matter where. I want to register here and live in peace.”
“Does that mean you don’t want to continue on like many others here?”
“No, I have arrived. I’ve been travelling for 30 days and I am exhausted. I’ll do what they tell me. Hey, I have gotten to Germany. My family is safe. What more could I want? I am happy.”

The train has left with about 1,000 refugees. Left behind are blankets donated by the local population. Helpers report that a lot of people are sleeping on the ground at the train station. Everyone takes a pile of blankets and we head over to cover up the sleeping people. On the way there we meet three young men who show us where people are sleeping. They take blankets from us and help distribute them.
I asked them: “Are you Syrians?”
“Yes from El-Sham.”
“Are you also refugees?”
“Yes, we have been here for 2 months so far and we already have our papers.”
“Then what are you doing here at this hour?”
“We came here to look after our brothers. After all, these are our people. We figured we need to help. It is our duty.”
I asked them about the asylum procedure and about their rights. I also asked them what they did in Syria before they fled. All three were students.