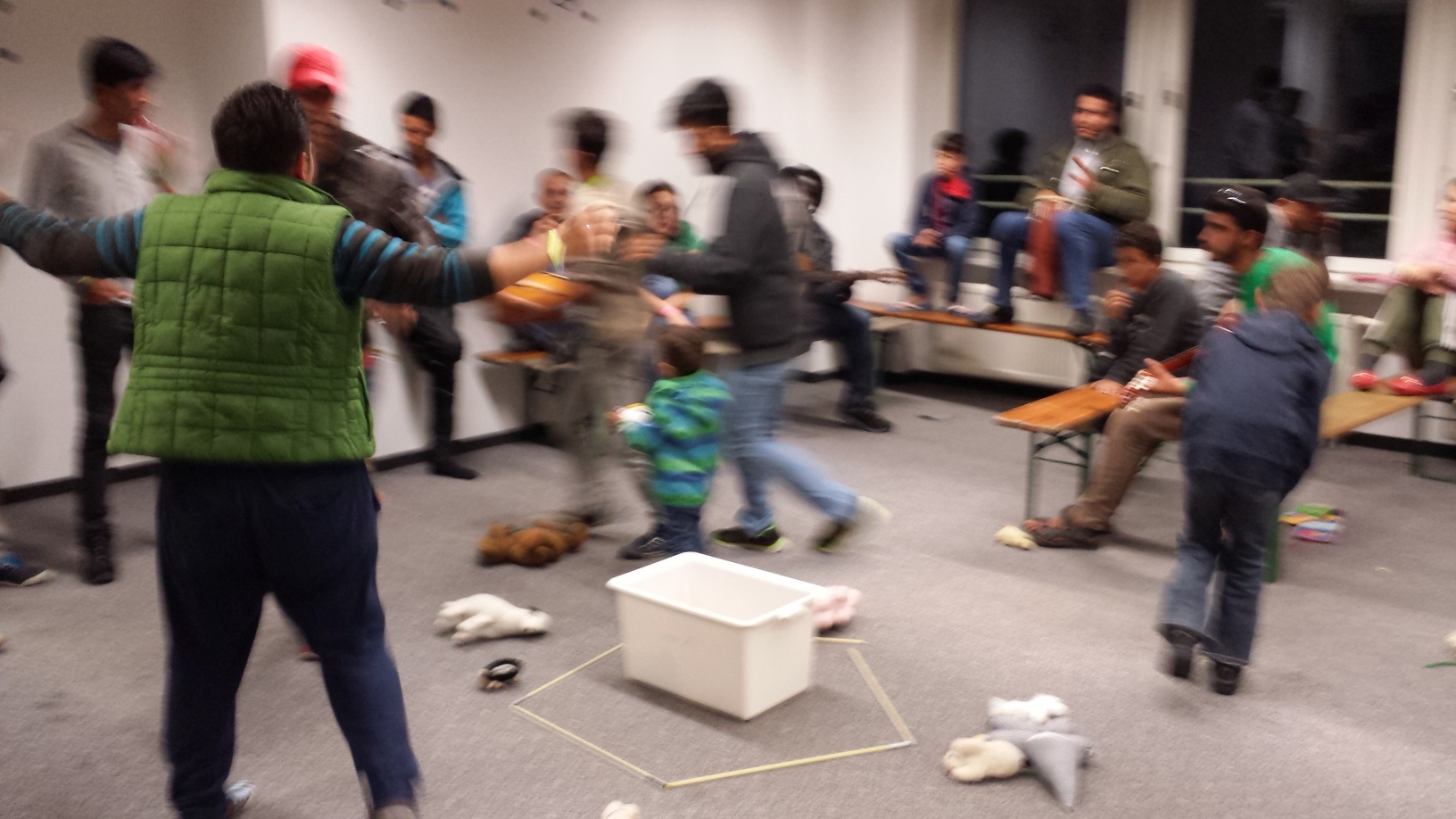 I stayed in Dornach from 7pm to 1am yesterday. About 340 guests were in the shelter when I turned up, with another 100 people arriving later on. It was very busy and I barely had time for conversations.

A Syrian man arrived with his wife with destination to Trier [a German town in near the French border]. He wishes to register his wife as his girlfriend, since he has a second wife in Syria. He would like to apply for family reunification with his other wife to bring her and their son to Germany. He knows polygamy is not allowed in Germany. However, it is legal in Syria. He asks: “what should I do, leave her behind?! I am responsible for her and I will take care of her”.

He is a lawyer from Damascus. He left because life in Syria was getting harder every day. The regime was becoming increasingly authoritarian. Despite him being a lawyer he was bullied every time he went to court.

An old man with white hair, about 65 years old, is eating a lemon the same way I would eat an orange – without making a face. I first met him a day ago at the paramedics when I translated for him. His foot has been swollen for 10 days and hurts. He said the swelling started when he was asleep. It looks as if he was bitten. I go and see him, greeting:

Peace be upon you (traditional Islamic greeting) Sheik (a formal greeting for an older man). “How is your foot today?”

“Thanks be to God, however nothing has changed.” (In the Islamic culture one always thanks God, regardless of whether one is well or not.)

“I suppose it was a difficult journey. How did you manage to travel so far with your foot like that?”

“Indeed, it was very exhausting. I had to walk very slowly towards the end of the journey. Every step caused incredible pain.”

“Are you travelling on your own?”

He is looking at me but then his gaze into the distance turns bitter. He is silent and I am wondering: what bad things must have happened to make an old man leave his wife and children behind, and to embark on such a long and difficult journey with a very uncertain future ahead?

I assist a rotund Syrian woman with connecting her mobile phone to the wireless internet. I offer her a seat while I am trying to connect the phone. She turns it down and smiles: ‘not a problem. We are used to it’. I later learn that she is traveling with her 70-year old mother. The old woman is in a wheel chair and cannot walk. I ask:

“Excuse my question, how did you manage to bring your mother here?”

“Allah helped us. We had two wheel chairs but both broke along the way.”

“How did you continue to travel?”

“We carried her in a sheet. Each of us held a corner of the sheet and that’s how we carried her for the reminder of the journey.”

I am lost for words. I try to imagine how this rotund woman is carrying her old mother and I am amazed by her strength.

“May Allah reward you with blessings. I cannot imagine what you have been through.” She is looking at me and all she does is smile. I ask her:

“Where are you from?”

“From Rif Dimashq. You know, we don’t have houses there anymore.”

“Yes, bombarded. They were destroyed to the ground.”

“Who did it? Who bombarded you?”

“First the regime, then the rebels. We were hit from both sides.”

I can hear loud laughter and singing from a somewhat larger room next door. I have a look into the room to see what is going on. An African man holds a guitar. A 20-year old Syrian guy puts toy animals in a circle on the floor and jokes aloud: ‘we are now going to do an African dance’. Then he and a few others dance around the toy animals in a circle (like in the old Indian and cowboys movies), and a woman with a headscarf is playing the djembe. Women, men and children sit nearby and enjoy the performance. A man is standing next to me and explains: ‘Tomorrow is Eid [festival of breaking the fast], and we want to lighten up the mood a little, so we are having an impromptu party for the children. We have already been here for three days. A young man comes to ask if I am also Syrian. When I answer that I am Tunisian, he says aloud: ‘listen everyone: I’d like to ask all of you to put your hands together for Tunisia’. Everyone is clapping and shouting ‘Tunis, Tunis’. This makes me laugh.

Then someone mentions the word ‘debka’. All toy animals are put away and six or seven young men dance a debka and sing along, while another one is playing the djembe.

The African man hadn’t stopped playing the guitar. However, none of his guitar playing could be heard.

A young man comes to see me. He asks:

“Could you help me with my sim card? I cannot connect to the internet.”

His accent makes me wonder if he is Moroccan. I ask: “Are you from Morocco?”

“And you are hoping to seek asylum here?”

His face showed the very same desperation and hope I saw in many other faces. I explained how to top up the mobile phone and left.

I’m helping at the food station. A little girl, I suppose she is 5 years old, approaches me and says with determination: ‘give me crisps’. I’m looking for some but cannot find any, and offer some lollies instead. As she takes them, I notice 4 chocolate bars in her hand. She takes the lollies and says:

“For my brothers and sisters.”

“Hmm. Let them know they should come and see me, and they can have some as well.”

We are going back and forth. The little girl drives a hard bargain without any smile; so that I’m very close to give in. Eventually, I take 5 lollies and suggest: ‘ok, let’s go and see your brothers and sisters. You introduce me and then I give you the lollies’.

At that very moment, her father comes along. He notices all the sweets and says: ‘what do you want all those sweets for? They are bad for your teeth’. He insists to introduce me to his wife and children. I give the sweets to the mother and suggest that she should keep them for the breaking of the fast celebrations the next day.

A young man with a guitar on his back is hanging out by the food station. I had noticed him earlier when he very carefully stowed away the guitar into the bag. I go to see him and ask:

“Are you from Syria?”

“Welcome. Did you bring the guitar from Syria?”

(He laughs). “No, I bought it here yesterday. One of the volunteers took me downtown yesterday. I actually play the oud. My parents will send me my oud by DHL.”

Two Syrians are hanging out near the food station. One of them is small but very muscly. I assume he is a bodybuilder. The other guy is quite young. I notice the crucifix around his neck. I ask if there is anything I could do for them. However, they ignore me and only have their eyes on a blonde volunteer. They approach the female volunteer and offer their help – with big eyes and a big smile in their face. When I return a little a later, I see the young guy carrying boxes around, and the muscle man is busy with the vacuum cleaner down the hallways.

A bus arrives with 60 new refugees in the evening: Afghans, Iraqis, Syrians, and Pakistanis. The new arrivals are given accommodation according to their ethnicity. Among all those people, a European looking family stands out. I ask where they are from. They reply: ‘Kosovo’.

At the end of the sorting two men are still waiting for their accommodation. I ask: ‘do you speak Arabic?’ ‘Yes’, one of them answers.

“No, he doesn’t speak Arabic, he is Pakistani.”

“Are you travelling together?”

“Yes, we are close friends.”

“How do you communicate with one another?”

This makes me laugh. He explains that they both used to work in Greece and they’ve known each other for a long time. This unusual friendship also puts a smile on paramedics and registration officers’ faces.