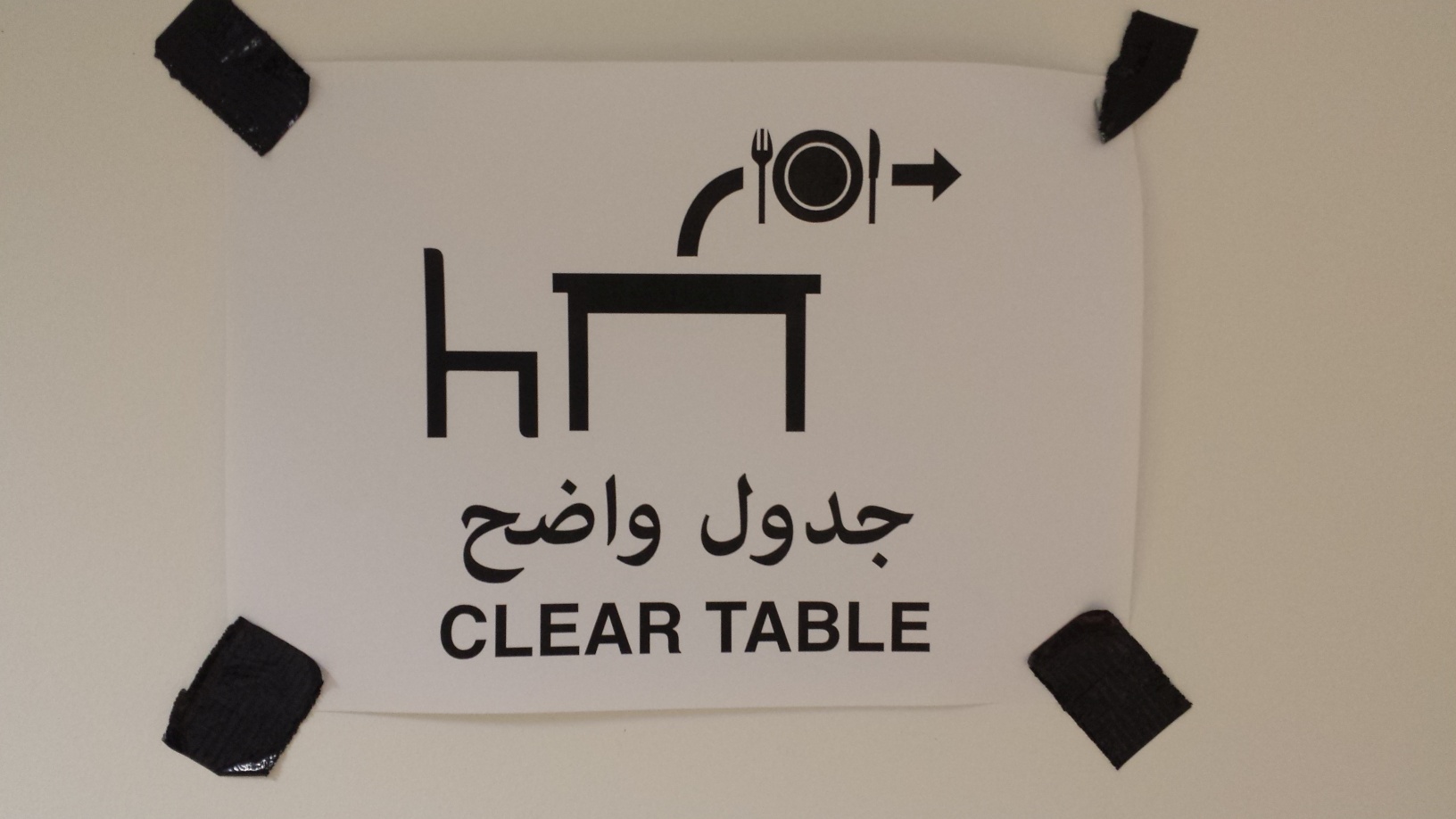 Yesterday, the information came in that from 8 p.m. onwards about 900 refugees would arrive at Dornach. Therefore, I headed over with a fellow Tunisian to help on site. Originally, I had wanted to stay only until 11 p.m. However, since the busses arrived very late, I missed the last train back. That’s why I slept in a room on camp beds with other volunteers for a few hours. From 10 o’clock in the morning I helped at the food counter again. After that, I got on my way home and escorted six Syrians to the central station. The majority of the new arrivals were Afghans. There were only a few Syrians, seven Africans from Mali and a few Iranians. Many of them had a cold or diarrhea. Furthermore, several unaccompanied minors arrived. The unaccompanied youths were a big problem because the city has restricted the support from the youth welfare office. There were many volunteers and enough interpreters for Arabic. What was lacking was mainly volunteers who spoke Farsi. Fortunately, however, some of the security staff spoke the Farsi language and could help out. However, this also meant that I was only able to have a few conversations. This was because of the language on the one hand and because we were mainly occupied with the reception of incoming refugees on the other.

Upon my arrival I met a Lebanese volunteer. We chat a bit. With a broad grin, he shows me a picture of a sign at the accommodation.

On the picture was a pictogram and underneath it, it said in English „Clear Table“. Under it, one could see the Arabic translation or what someone thought to be the translation: „Distinct Diagram“. That of course did not make any sense at all. I am greatly amused.

I removed the sheets and created new ones. This time with a better translation and a little less of an authoritarian ring.

There is a bus at the entrance. After I made the announcement on the bus, we waited briefly until the incoming refugees from the previous bus have passed through the health inspection. I talked with a small group of Syrians who sat near the driver.

They looked at each other thinking. One of them shook his head and said: „I don’t know.“

During the distribution of the incoming refugees into the different rooms, volunteers ask me whether Syrians and Kurds understand each other. It’s all about the question of whether it is possible to accommodate a group of five Syrians together with a group of five Kurds in one room without giving rise to disputes. As a precaution, I go over to the Syrians and ask one of them:

„Can we accommodate you together with the Kurdish brothers in one room?“

One of the Kurds nodded in agreement and said: „Yes, sure, everything is alright.“

The Arab Syrian added: „Just not in one room with the Afghans please.“

In the morning, after a few hours of sleep on a camp bed from the Federal Armed Forces, I helped a bit with the food distribution and finally made my way home. A group of five Syrian Kurds joined me. They wanted to go to the central station. There, I helped them purchase tickets to travel on. At first, they wanted to go to a friend to Dusseldorf, but later decided to travel only as far as Augsburg, since they also knew someone there. On the way, we got into a conversation:

Before we said goodbye at the central station, one of the young men came up to me and asked me: „How do you say pig in German?“

„Pig? Why do you want to know that word of all things?“ I asked him in surprise.

„So that when we buy food we can say that we do not eat pork.“

He looks at me with incredulous eyes and says: „Schwein as in ‚Schweinsteiger‘?“

In the beginning I did not understand what he meant. Then, however, I had to laugh and said: „Yes, Schwein as in Schweinsteiger.“

On the way to the central station, along with the Syrian Kurds, an Arab Syrian who wanted to go to his brother at Regensburg also accompanied me. On the way, I asked him:

He looks at me and says almost apologetically: „Believe me … I would never tar an entire people with the same brush, and I know that there are many good Tunisians. However, the Tunisians of Daech are very bad. At least you can still talk with the people of the Gulf States and they have an understanding of your situation. But the Tunisians often kill very quickly.“

„I am terribly sorry. All the Tunisians I know think nothing of the ISIL, their ideas and actions. I have seen videos in which Tunisians from the ISIL were shown. They behave and speak often more like crooks there and not like extremely religious people.“

„They aren’t religious people, that is for sure. They come only for the money. The Muhajirin get a great amount of money.“ (Muhajirin is actually what those Muslims are called who migrated from Mecca to Medina at the time of the Prophet in order to escape the oppression of the rulers of Mecca. It basically means migrants.)

He took the train to Regensburg to his brother, who has been living in Germany for 25 years.