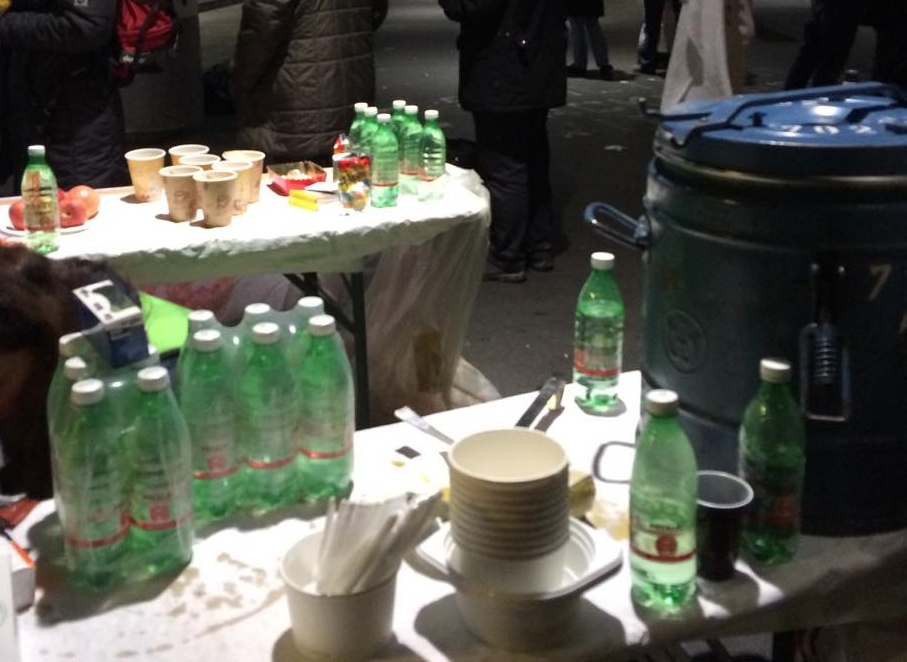 I hadn’t really planned to go out again this evening. But at about 11 p.m. I got a message from the ZOB volunteers that more buses were expected. So I went out around midnight to help out for two hours. It was a cold night, and because it was very late and no more buses arrived, I only have two meetings to tell you about this time.

A group of three Somalians are standing at the volunteers’ desk, shivering. Two of them are eating soup. They only speak Somali and some poor English. The third approaches me and asks if I speak Arabic (Arabic is an official language, spoken mostly by educated Somalians). He asks about clothing for him and his companions. Two of them are wearing only a t-shirt under a thin jacket. We do our best to equip them out of the ZOB volunteers’ supplies, but many of the jackets that we have there are too large.

A Syrian approaches me and asks about a jacket. He’s only wearing a thin raincoat with a t-shirt under it. We spend quite some time searching for something in his size. Eventually he’s happy with a pullover and a warm, woolen jacket. A second Syrian with a thin, 19 month-old child on his arm approaches and asks for a car seat that they need for the bus-trip to Essen. We don’t have an appropriate seat, and in the end he takes an infant-carrier that’s really too small for the child. Both men belong to the same group, comprised of five men, a woman, and the small child. The child is coughing and has a light fever. We volunteers try to help the child as much as possible, and at some point a medic comes by. He wants to call the police so that the refugees can be brought to a camp, as he doesn’t want to leave the child sleeping outside.

“I don’t want to be registered in Munich,” the woman refuses. “My sister lives in Essen, that’s where we want to go. We don’t need warmth – we’ve travelled through half of Europe and we’ll manage the last bit.”

We volunteers weigh up our options. I offer to bring the group over to Denisstraße, and we get on the way. Amongst themselves, they speak a language I don’t understand and I figure they must be Kurds.

“From Al-Hasaka,” answers one of the men.

“In the north of Syria, near the Turkish and Iraqi borders.”

“What drove you to leave?”

“Daesh [he means IS] kept on attacking.”

“Daesh has captured Al-Hasaka? I hadn’t heard,” I say, astounded.

“No, they only attacked multiple times. But the PYD (Democratic Union Party in Syria) fighters managed to repel them every time. You know the PYD?”

“The defense is too strong. They won’t capture Al-Hasaka,” he says with a little pride in his voice.

“How long have you been travelling?”

“That’s fast. Were you put in buses?”

“Yes, in Slovenia and Croatia they drove us from one border to the next.”

Meanwhile we’re halfway there. One of the men approaches and says, “Syria was a beautiful place. I loved it. I would never have left it.”

“They destroyed it,” I say wistfully.

“Fifteen years ago I could have come to Germany,” he tells me. “But I was too attached to Syria.” He’s silent for a few seconds.

“But now we had no other choice.”

“Did you flee through Turkey?”

“Yes, we were there for two years. Then we decided to go further.”

“Why? Was life not good there?”

“Turkey is beautiful, but expensive. And as a Kurd it’s hard to get work. We don’t have a future there.”

We arrive at the emergency accommodation in Denisstraße, There are only the security guards present. But they refuse us entry, and explain that we need a pass. But at 2 a.m. it’s not possible to get one. I explain about the small, freezing girl. But still he says he can’t let us in. It could cost him his job.

So we start walking back to the ZOB. We’re silent nearly the whole way. Only one of the men, he who I hadn’t yet spoken with, comes up and asks me, “How far is it to Leipzig from here?”

“My father is there. He already has a resident’s permit.”

Once back at the ZOB, we supply the group with sleeping-bags and foam mattresses. I help to set up a place for the small girl to sleep. I take my leave from the group, but before I go the father asks me a few questions about SIM cards and the German mobile networks. Lastly I say, “When you want mobile Internet on your phone, you need to ask explicitly for it. Not all SIM cards in Germany offer this.”

He looks at me as if I’ve said something truly unbelievable.

I’m back home around 3:30 a.m. As always I go and check on my daughter in her room, and tuck her in. I kneel by her bed for a few seconds and think of the small girl, lying in the cold at the ZOB with her parents. I hope this will all be behind her soon. And I also think about those who perhaps are just starting their travels to get to us.

Soon the winter will arrive.

Soon the snow will arrive.