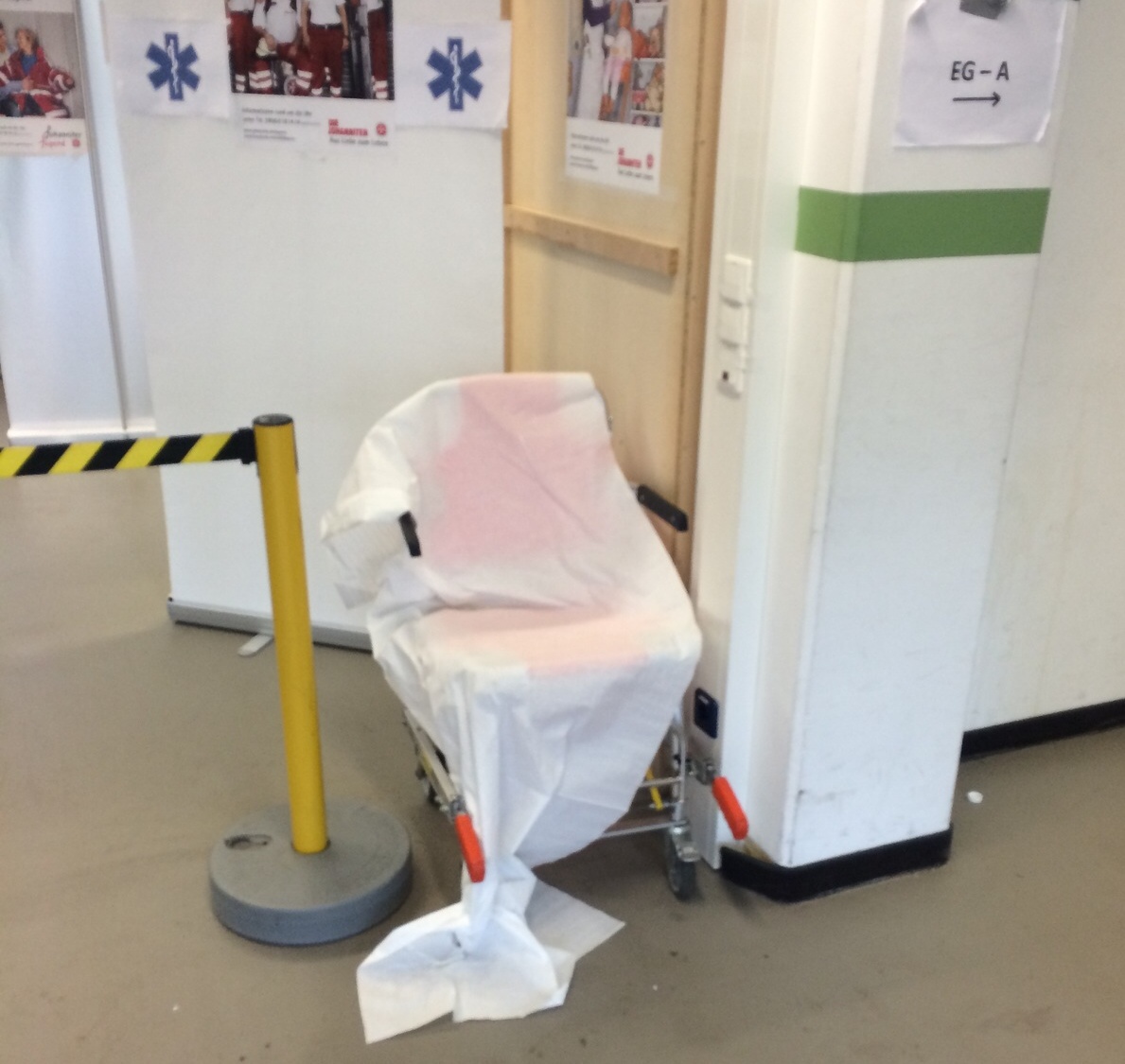 Another 1,500 refugees were said to arrive at the shelter in Dornach. Since it is hard for me to do night shifts during the week, I decided to spend the night there and stayed from 11 p.m. to 7 a.m.

Upon my arrival, I realized that I was not the only one who had had this thought. The shelter was full with volunteers. I had never met as many in the evening. There were also some new faces. This makes me very glad, because it contradicts the assumption that support would decrease.

Other than the volunteers were only a few refugees in the shelter when I arrived. The volunteers used the time to prepare for the arrival of the buses, sorting clothes or just chatting.

Then the buses arrived.

Most of the people arrived from the German-Austrian border, but some buses also carried people from Maria-Probst-Straße (in Munich). They were mainly Afghans. Also many Syrians and Iraqis and a few Iranians arrived. A young man from the Comoros was among them as well.

I spent most of the time with the paramedics of the Hospitallers again. During the time I worked there, I saw people suffering from dizziness, collapsing even. Others had the flu. I saw children who have had diarrhea for several days and were throwing up often. We had a suspicion of tuberculosis which fortunately turned out to be wrong. A lot of elderly and frail persons arrived but also many healthy young people who only had one goal: to continue their journey.
But one thing everybody had in common was exhaustion.

A man, connected to an ECG, is lying in the paramedics‘ area. He says he is from Mosul in Iraq. He has fled ISIL.

„I’ve fought them for a long time. But I am exhausted. There is no end in sight.“

„Mosul is the capital of Daesh (ISIL) in Iraq, right?“ I ask.

„Yes, it has become difficult there,“ he says. Then he adds: „I will not tell them in Germany that I was a soldier.“

„They will accuse me of AWOL and will extradite me,“ he says with persuasion.

„Was the trip exhausting?“ I ask.

„Yes, but I’m strong and healthy. The boat capsized on the way from Turkey to Greece. 46 people drowned. I could swim and made it onto land,“ he says.

He complains about a beep in his ear. He says it is from the shots and bomb explosions close to him. He has been suffering from it for five months by  now.

A young Syrian tells me he holds Swedish citizenship and has actually been living in Sweden for seven years. All along, he is wearing a headlamp and a yellow volunteer’s vest.

„I went back to Syria and took my mother and my aunt to Germany. My aunt is in a wheelchair. That delayed us for a long time.“

„You went to Syria to accompany your mother on her escape?“

„Yes, after all she cannot make the journey on her own.“

„Why was your mother in Syria in the first place, as you have already been living in Sweden for seven years?“

„She separated from my father after a family quarrel and lived in Syria ever since.“

Two Arab volunteers are standing next to an elderly and frail woman in the waiting area of the paramedics. She is looking rather weak and is sits in a wheelchair. Both volunteers have concerned looks on their faces. As I get closer, I see that the lady has tears in his eyes. A headset is plugged into one of her ears. I ask one of the assistants if she is here alone.

I guess the woman is over 60 years old. She is petit and skinny. Behind her are a backpack, a large handbag and two large bags. I ask the volunteer: „How could she bring all of this?“

I kneel in front of the elderly woman, greet her and ask: „Where are you from?“

„From Aleppo,“ she says in a tearful voice.

„How did you manage to get here all alone?“

She raises her index finger of her right hand and says: „Allah has brought me here. He has made it possible for me.“

„Did people help you on your way?“

„Allah alone has helped me!!“ she says.

„Do you have any family here who had fled before you?“ I ask in the hope that she has a destination to head towards. Some place where someone will take care of her.

„I have two brothers,“ she says and starts to cry. „They both remained in Halab (Aleppo). They could not escape because of the siege.“ Her voice is weak and her eyes are red. „I also have two other brothers. They are both missing. One of them two years ago, the other three years ago,“ she says, weeping. I cannot think of anything to say to calm her. „And another brother was killed when he went to get food for his children.“ Listening to her was heartbreaking. This elderly lady had to endure so much and arrived in a country foreign to her. She had no-one but herself and Allah in who she trusts so much. When she is called to the doctors, she hands the headset to one of the two volunteers and thanks him.

After she had left, he told me that she had cried so much at first that he had offered her to listen to the Koran on his cell phone, which she had gratefully agreed to. The verses recited had calmed her a little.

A big, somewhat older man is waiting in the ambulance area. He is en route with his daughter and her three little sons. He asks me where he was and how long they would stay. I tell him they are in Dornach near Munich and will probably stay here only for one night.

„I lost half of my family on the journey. I’m here with my daughter and my nephew. We were separated from her husband, my wife and other members of my family, „he says in complete bewilderment.

„Where did this happen?“ I ask him.

„At the border with Austria. We had to disembark the train and then were guided to buses. We had to get on quickly, regardless of our families. Straightaway, I lost sight of them. They’ve probably stepped onto another bus. Do all the buses come here?“

„No, not necessarily. We are expecting a few more buses tonight indeed, but it’s not certain their bus will come here, too. Can you call them perhaps? Maybe via WhatsApp?“

„No, we don’t have a cell phone. It remained with them.“

„Do you have family in Germany?“

„Then call him and let him know where you are. With a little luck the rest of your family has the same idea and calls him, too.“

The old man looks at his daughter. She says: „We don’t have his number. We have no number with us at all.“ I think about it but I cannot come up with any idea to help them now. I ask other volunteers if they have any thoughts. But none of them have. I say to the man he should go to the dining area in the morning and look out for them. Should they arrive in Dornach during the night, the best chance to meet them was there.

At six o’clock in the morning, the last of the Syrians are assigned a room. When I leave the shelter, about forty Afghans are still waiting for a room. They are mostly young men, but there are also women and families with children. They look exhausted, yet full of hope. I’m thinking of politicians gradually calling for their extradition. A volunteer of Afghan descent told me that very evening many Afghans feel anxious and are afraid of being deported.

Have they endured the long journey for such an ending?