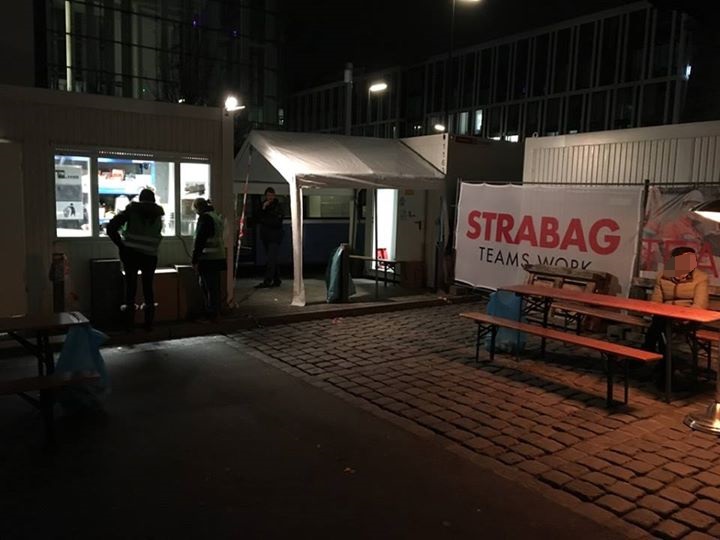 A journalist from the Bayern 2 radio station contacted me to accompany me one evening during my volunteer work as a helper and interpreter. Since in most emergency shelters accreditation by the government is necessary, I suggested to help out one evening with the ZOB-Angels at the central bus station. Accordingly, we met at 8:30 p.m. at Hackerbrücke and went to the volunteers‘ containers. This time again a lot has changed at the central bus station. In addition to the containers and the patio heater I already described upon my last visit, there was now a pavilion in front of the container for the clothes distribution and (this was the best) a bus for warming up. The bus offered a warm lounge for 30 to 40 people. Initially, there were men in the bus, too. But they were sent out one by one to make room for newly arrived women and children. The men accepted every time without protesting. Generally, a lot of children were on the way that night.

I was not very long at the central bus station, but in the short time, quite an interesting conversation with a Syrian from Deir-Ezzor arose.

Three Syrians were talking. I joined them and listened. When I asked one of the three men, where he came from, the journalist from Bayern 2 stretched out her microphone between us. The Syrian with whom I had just talked looked at her in amazement and stopped talking. I explained the situation to him and said: „She’s a journalist who accompanies me to report on my activities as a voluntary helper. I am writing a blog and tell the stories of the people that I…“

Before I could go on talking, he interrupted me, looked at me with big eyes and said: „You tell stories?? God has sent you! Come here, I have a story for you. You have to tell it by all means!“ When he said that, he seemed very excited and added: „Tell them that the German embassy in Ankara is forcing people to pay bribes. If they don’t do that they drive them into the arms of the traffickers.“

I am completely surprised by this information. Since I was unsure of how exactly he meant this, I asked: „What do you mean? Explain it to me in detail.“

„I have filed an application for family reunification and therefore submitted the documents of my family at the embassy. But they gave me nothing but trouble.“

„Does that mean you’ve been here already for longer already?“ I ask.

„Yes, ever since April 2015. I have already received my residence permit and my whole situation is well-ordered. I even have an apartment north of Berlin. That’s why I filed the application. But the embassy has demanded bribe money from me. Over and over again. Finally, I brought my wife and children across the sea to Germany. I have 12 children.“

„They are all here. In the bus. Come on, I’ll introduce them to you!“ We go to the bus. Along the way, I explain the situation to the journalist. She could not help but wonder. When we arrive at the bus, he introduces me to his children. The oldest is 15 years old and the youngest just two months old.

„And you have put them all in a rubber boat with their mother?“ I ask him.

„Yes, I have,“ he says. „I had no choice. The baby even fell into the sea. But his mother could pick him out of the water at the last minute. Imagine, she even had to sell her wedding ring in Turkey to buy the lifejackets,“ he said filled with bitterness. Then he added angrily: „I had all the documents, but they blocked me. It is a Syrian employee of the German embassy. She blocks many applications. Why else should so many people come over the sea? Many have lost their children in the sea because of this woman.“

„Are you saying that she blocked you on purpose to get a bribe?“

„Yes, exactly! Come here, I’ll show you my documents,“ he says and rushes to his luggage, pulling out a backpack and taking out a pile of documents in a clear protective sleeve.

„Look, these are the passports of my wife and children. Here are also the birth certificates. These are certified translations of birth certificates, extracts from the family register…“He shows me every single document. I look at some of them in more detail, put others aside quickly.

„This all costs money. The translations, the fees and the time.“

„And what did you have to pay a bribe for?“ I ask.

„At first I had to pay $ 100 for each child. Look, I can prove it to you.“ He shows me a photo of a document on his cell phone on which there are the names of his children. In front of each name was written with red ballpoint pen: „$ 100“.

„Is that the normal registration fee?“ I ask.

„I went to the embassy and paid $ 1,000 of bribe to get an earlier appointment. They gave me an appointment for November 11, 2015.“ He showed me other documents from the embassy, which suggested that he had actually appeared there in person. Then he showed me a copy of a document and said:

„This is the only document that I could not show the original of. I would have had to go back to Damascus to get it. And who knows whether I would have ever obtained it. I would have been on the road for one and a half months. She faced me with a choice: either I pay $ 1,000 of bribe or I have to go to the traffickers. She gave me the contacts of the traffickers, too, right then.“

„Who faced you with the choice? The Syrian employee of the German Embassy? Am I getting you right?“

„Yes, she is an evil woman. She does much injustice there. Anyway, in the end I put my children into the rubber boat.“

„But how could you finance the crossing by boat?“

„I had to give the house and my father’s land in Deir-Ezzor in mortgage.“